Yesterday it was finally there, Final Cut Pro X.
I’ve been using Final Cut Pro for some time and experimented a bit with Adobe Premiere (which to be honest looks promising but somehow doesn’t click with me). In the last few months however I must admit that I’ve been more and more drifting towards iMovie (don’t laugh but read on).

For me as a photographer editing video is something that is not my primary activity, I have to say that I love to work with video and the more I do it, the more I’m beginning to like it. Over the last year I’ve filmed two videoclips with the most recent being only last week. When I see the difference in speed between the first one and the second one there is a huge difference. With my first videoclip I hated the whole editing process, I did not yet found out the multiclip option within Final cut Pro and getting fast edits in Final cut Pro was a horror scenario for me.
Because I strongly believe that we as photographers need to do motion to make sure we stay in business in the future (and to be honest I also love to do it, but I hate the long edits) I decided to do another videoclip but now use the multiclipping option within Final cut Pro, man what a difference. The whole videoclip was edited in the raw version in about 2 hours, some color changes took me just as long (yeah I’m picky and rendering takes way too long). During the last videoclip I did ran into some problems, I needed to add three drives in Raid 0 to my setup because I could not run more than 3 angles at the same time without taking a very high hit in performance, however with the Raid 0 setup it was blazingly fast.

After this experience I’m much more convinced that motion will be part of our portfolio for the future (the next videoclip is already in planning stages), so I decided to get a new MacPro with hyper-threading, but decided it would be wise to stay away from the 12 core and go for the 8 core (same as I already owned) because I expect the Sandy Bridge somewhere end of this year or starting next year, and the 8 Core will probably be easier to sell than the 12 core (less money lost). 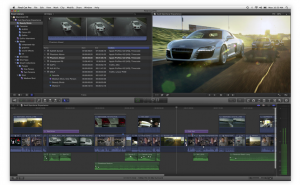 So we need a program that supports all that power…..
Enter Final cut Pro X.
64bits, support for “real time editing” etc.
And more importantly for me a much easier way of working with it.
Remember I told you I switched for some things back to iMovie ?
The reason for this is speed, when I edit with iMovie I work at least 4x faster than with Final cut Pro, where I have to add that we use iMovie only for the backstage videos and those are the kind of videos we just drag the clips into the time line, cut them to the desired length, add some music and text and render them to the end result. When we need to do more I always used Final cut Pro, however more and more I miss some of the speed of iMovie, and when working in iMovie I hated to miss some stuff that I have in Final cut Pro. Final cut Pro X would fill that gap…..

So I’m happy ?
Well to be honest I don’t know yet, and I hope you guys can also give some input.
What I’ve seen from videos and read online I think everything is in Final cut Pro X that I need, however there is one thing I miss, and to be totally honest I can’t believe it’s really not there… at the moment I’m still downloading Final cut Pro X and will install it tonight to test it further (for a future blog post). What I hope is that there is another way to work with different camera angles and I think I already saw something, when dragging the time line you can see the different clips when you move the mouse over it without having to enable or disable the tracks, that would be a great way to make multi-clipping work, but I really don’t know yet how….. that’s why I ask you guys to think with me, or maybe I’m just missing something, time will tell, again I’m still downloading and did not yet test the software.

So why this blog post ?
First of all I think it’s important for us as photographers to start thinking about motion if you don’t already are venturing into that area of “story telling”. Second of all to trigger some responses from you guys and see if we can speed up our progress in understanding Final cut Pro X.

Solving multi-clipping for the time being.
Because Final cut Pro and X can be on the same machine, an option would be to edit the different angles in X and save them as quicktime files and import those into Final cut Pro to do the multi cam, export those clips and make the final adjustments in X. Well ok it sounds like a detour but if it speeds up the process in the end who cares…. well ok I really hope Apple will come with another solution so I can delete Final cut Pro, or a third party will come with a solution.

There is so much missing, X is not for pro’s.
Well we’ve all read this, and I really don’t know if it’s true ?
It probably is true, but I for one never use 90% of the things they mention in those blogs, maybe because I’m just a photographer or maybe because I don’t know how to make use of things like XML. For me it’s important that I can import different clips from the 5DMKII, iPhone and our HDV camera and edit them all together with loads of speed, color correction must be preferable a one touch solution, creating a nice look a few minutes work etc. etc. in other words I need iMovie on steroids, with multi tracks and options like slow motion (that works ok) and speed ups. As it looks now Final cut Pro X is all that….. so that’s why I decided to give some attention to it in this blog without adding my experiences with it, which I will do in a later blog post.

Feel free to add your opinions and tips etc.

Behind the closed DOORs teaser episode 1