Must be the weirdest title I ever used for an article.
You can fill in the blanks yourself, but let me start by doing one that I wrote this article about.

All people that don’t meter are stupid……
And before you explode and start mailing me, please read on.
Every week I get a few mails from people that have seen me using a meter and they are always in 2 camps. 1 group will try to convince me that they love the work I do but advise me to stop using a meter, the other group wonder why there are so many people out there on the web, on youtube, on training sites etc. who still struggle without a meter. 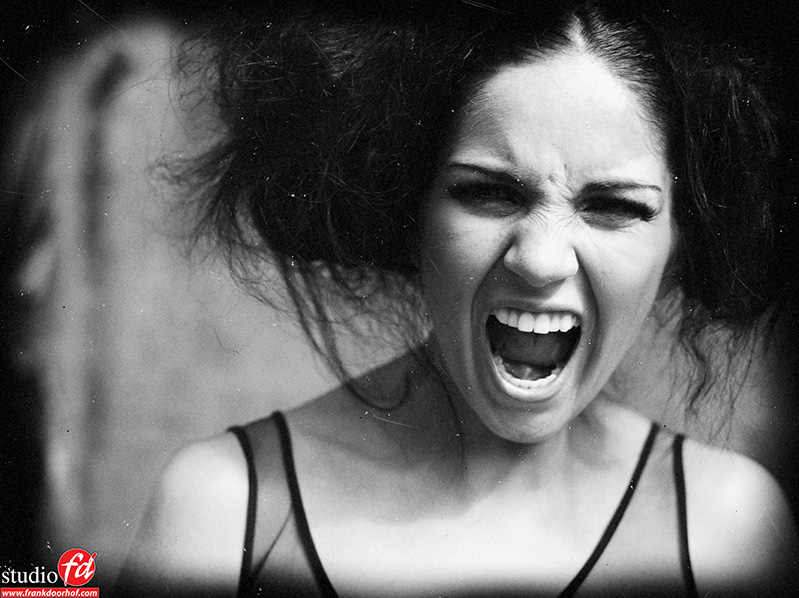 It’s no secret that I love to use my meter, in every workshop there is some attention to the meter and how to proper use the tool. And there we go already please do remember that the meter is just a tool. In the end it all boils down that we tell a story with our images, move people with our images or/and make something interesting for other people to enjoy, endure or love. That’s photography. Using a meter is just a tool to get to that end result.

First things first
Don’t read this as if I say that you shouldn’t use a meter, no way.
I strongly (and really read STRONGLY) believe that if you’re into photography, and you don’t even have to be a pro, you will have to use a meter to get accurate and constant results. I really don’t care if people say that they get great results without meter, my answer to them is “you will get there quicker and probably even get better results when you DO use a meter”. But in the end, and please do remember this…. you can make shitty images with a meter and great work without. But let’s look at some things I want to clarify.

END_OF_DOCUMENT_TOKEN_TO_BE_REPLACED

I met Neil during my workshops in NY last year and we immediately had a “click”, Neil is not only a great photographer but also a real nice person and I loved hanging out with Neil and doing a cool shoot at the beach with a small team of friends (always the best way to shoot). A while ago I did a guestblog for Neils blog and today he returns the favor for you readers. So without leaving you waiting for the man…. here is the guestblog by Neil.

Off-camera bounce flash
by Neil van Niekerk
neilvn.com/tangents/
Earlier on in 2011, I was fortunate in working with an exceptional model, Ulorin Vex. She is well known for her styling and fetish costumes and also for her striking looks. She also happened to be supremely easy to work with, with her lovely and quiet demeanor – always professional. What I want to share in this article, is the thought-process that I took during this photo session. While I might have an idea, it usually takes a few detours getting there as I adapt to any specific situation. For this photo session, I was shooting in the hotel we were staying in in California. As a boutique hotel, there were a number of interesting potential places to photograph in. The room that I was staying in, had these broad yellow and green stripes … and when Ulorin Vex put her red latex outfit on, I thought this would be perfect as a backdrop – striking, bold colors. 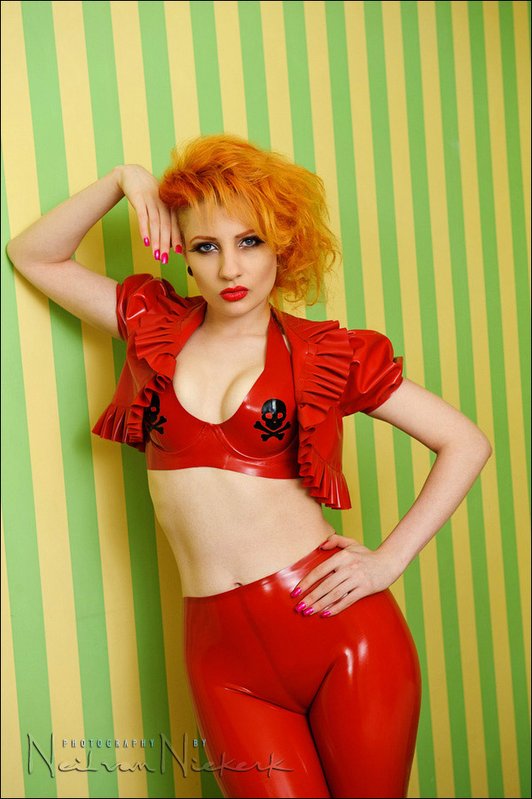 This final image was quite simple in its execution and how it was lit up. It was lit with a single speedlight bounced towards the corner of the room away from Ulorin Vex.
END_OF_DOCUMENT_TOKEN_TO_BE_REPLACED
https://frankdoorhof.com/web/wp-content/uploads/2015/03/studioFD_Logo-1FV.png 0 0 Frank Doorhof https://frankdoorhof.com/web/wp-content/uploads/2015/03/studioFD_Logo-1FV.png Frank Doorhof2011-11-29 07:00:372011-11-28 15:07:37Guestblog Niel van Niekerk

A model mailed me a while ago with the term… Dark Lingerie.
I love it when something that short triggered my mind. I love to work with shadows and I love to play with more themed shots. I’ve worked with her in the past and love her very light skin, in combination with shadows and lingerie this is a killer combination. 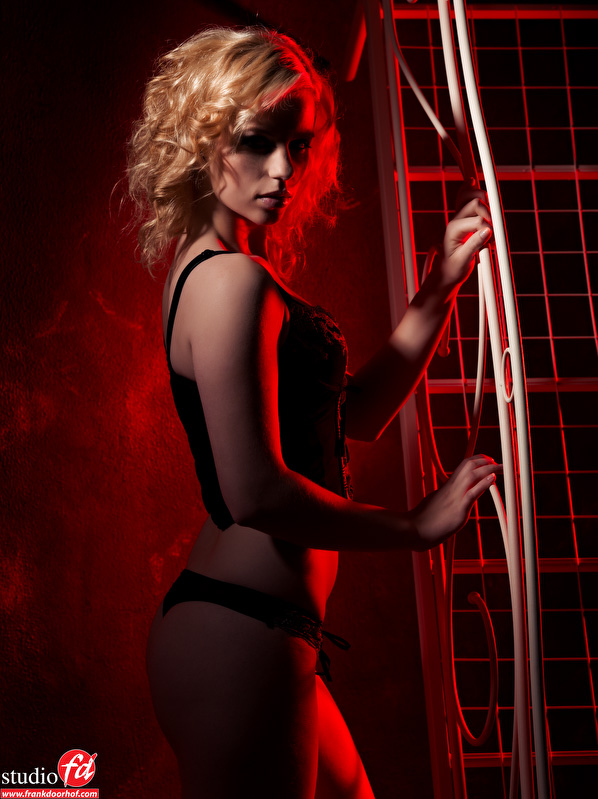 Lately I haven’t been using a lot of color gels on my strobes, but this setup screamed color for me.

END_OF_DOCUMENT_TOKEN_TO_BE_REPLACED

Last Sunday it was time for the DIPP meeting of the year. The DIPP is the Dutch Institute of Professional Photography so the members are all photographers that know how to work with their camera. When I was asked to teach a workshop as main speaker for this event I immediately said yes but I also knew that this would be something that was different from most other seminars/workshops. Last year I won Portfolio of the year during the same event so I think people did expect something from the seminar.

I divided the day in three parts, starting with a small introduction on my work and what our studio does, after which I showed the video for http://www.help-portret.nl which I organize for the Netherlands. Then it was time for a seminar about “Inspiration, reaction, getting the shot”, this seminar is part of the seminars I do during the “why fake it when you can create it” tour and always get a lot of good responses due to the fact that it’s not only aimed at model photography but a much broader audience. Because I hate to “bore” people with 3 1/2 hours of powerpoint like presentations I also invited Susanne to model during the last part of the day…. well so I thought.

Normally my seminars are good planned and most of the times I start and end at the right times, most of the times. During the second part of my seminar I misunderstood a signal and thought I was running slow (sometimes times flies), I looked at my laptops time and much to my horror indeed it was already one hour later than expected, wow time flies when you’re having fun, so I somehow upped the tempo and instead of allowing people a 30 minute break for some of the other activities I gave them 15 minutes. During the live demo with Susanne everything went smooth and I ended only 20 minutes over time (skipping my Q&A). Much to my horror and disbelieve however I got the question what would happen after this break…….. believe it or not the clock of my laptop was one hour ahead (aaargh). I decided this was no time to panic (although I did) and I ran to our friends from NIK, stole their Wacom tablet and ended the day with Part IV (let’s call it the bonus part) with a small demonstration of how I work in Photoshop. Don’t ask me how but I managed to run over time after all

To be honest this never happened to me before, well not this way…
During Photoshop World in Vegas I was doing a lot of floor demos, small interviews etc and I knew I had to teach a seminar at “let’s say” 14:00, somehow I managed to be there just in time (missing the book presentation from Scott, sorry Scott), when I arrived much to my surprise there was only one person in the room, I quickly checked the schedule and indeed I had to be here… well ok, one moment you teach for a full room (and those rooms are HUGE) and the next probably for only one, although that seemed really weird for me I told the guy that we would start in 5 minutes and that he could ask whatever he want…. his reply shook my pure foundation “I’m only here to rest, he stood up and left”, I almost fainted….. until I checked my actual time, due to the stress of the day I was one hour early :roll:, luckily after that hour the room was packed. I never actually wear a watch, but I think I will start doing that from now on.

We also shot a small video during the day, which I would like to share with you in this post. The weather was incredibly bad that day so we also filmed some of the roads.

ps.
Don’t worry, I used Elinchrom during the demonstration, but there were several other brands there 🙂