Some products are released and you wonder…. “why that name?”
Or you just ignore the product for the simple reason that you think it’s not for you.
Well it’s no secret I’m a huge fanboy of the LaCie products, and we also work together with LaCie on some things, but still I hope you understand that this article is 100% my own thoughts, not paid for by LaCie, and certainly is not colored in anyway by the fact we work with them. In fact the ONLY reason I work with companies is because I just love their products, in my opinion that’s way more important than anything else, because that way you guys will give me your trust, and I would never do anything to break that…. well that being said let’s start.

The DJI Co Pilot
The minute I heard the name I was not immediately interested and I can imagine that many of you also have the same thoughts that I have…”It’s for a drone, and specific a DJI drone” right?….. well I understand that 100%, but I couldn’t be more wrong.

Let’s start with a little bit of a backstory.
Annewiek and I ran a computer store for many many years (actually over 2 decades) and in that time one of the things we learned was to make sure you have backups, and people knowing me know this is without a doubt something I always stress. We store not only images but actually frozen moments in time that will never ever come back, if something happens to them I would be devastated. Now in the studio or at home it’s easy. Just add a DAS (Direct Attached Storage) and a NAS (Networked Attached Storage) and if you want to be sure always backup this weeks work on a separate harddrive and take that home or to a friend or parent. But how do we do this on the road?

Well in my case I always travel with 2 rugged drives and backup every night (automated process) on these two drives, I’ve set them up like a sort of “mirror” with software. Now when we travel, one drive goes in the suitcase and one drive comes with me or Annewiek. And when we leave the room or hotel one drive is in our car or in our bag so when something happens in the hotel/house we have our images and video…. call me crazy but trust me in over 2 decades of running a pc store I’ve learned from other peoples mistakes.

So in short we always carry around a drive.
Now let’s go back in time.

There was a time when cards could be filled up during a day, in fact there were days where I easily would fill up 2-3 cards by just visiting the zoo, at that time cameras were not really build for RAW and cards were certainly not ready for RAW…. oh sorry let me rephrase… cards were not prepared for my addiction to shoot a lot of images (that sounds better and closer to the truth I guess) anyway… we needed more room.

Enter the Image Tank
Oh my, did I love these, I was literally in love with them, I think that over the years I have owned at least 3 different image tanks before ending up with one that had it all (expect battery life that was), replaceble harddrives so I could grow the system, extra batteries (very much needed) a “crappy” display that actually was so bad you could only see that it was done, and…. well it was relatively small…. oh man who am I kidding, the bloody thing was huge and heavy. But… it always traveled with me.

Ok we are now many years ahead in the future and we (in all honesty) don’t really need an image tank anymore. Cards are up to 256GB and if you have deep pockets you get much higher capacity. But there is also more, where in the old days I shot with one camera I’m now shooting with my A7RIII from Sony for stills, I have a Sony A6500 for the vlog, we drag a small Zoom recorder with us for recording interviews if needed and I have a drone (Mavic pro with me), plus we of course have our dashcam. I have to say…. this is in a worst case scenario, but it does happen that we bring all of this. (oh and add my phone to this). Long story short… we shoot a lot of material.

Again, we don’t really run into problems with cards, even when roaming the streets of New York I hardly shoot more than 64GB (my max card size) and when I do, well… I always have a second one with me, and I also never fill a 32GB card with video for the vlog, unless I’m doing time lapses, but hey… we have another 32GB for video with us. Yes I use 32GB for video and 64GB for photography, I always shoot very short videos for the vlog so I normally manage well within that capacity.

The state of mind of the photographer
When I walk around in New York or any other city (I just always take NY as an example because I never shoot more images than in that city… it’s CRAZY) I might not fill up my cards but there is much more to worry about.

So where does the LaCie DJI Co-Pilot come in?

It’s so much more
The LaCie DJI Co-Pilot could be labeled as a hyper modern image tank. It’s not able to just work together with DJI products but it will actually do a lot more, in fact…. I think that it will be used by more people that don’t even own a drone than it will be by people that DO own a drone, as long as they realize the importance of a device like this.

So let’s take a look at some of the things it can do
First up the design.
You know I love the rugged drives, and it’s not just because they are orange (Hey I’m Dutch), but it’s the way that the drives are protected and don’t slide around in your bag or on a table. 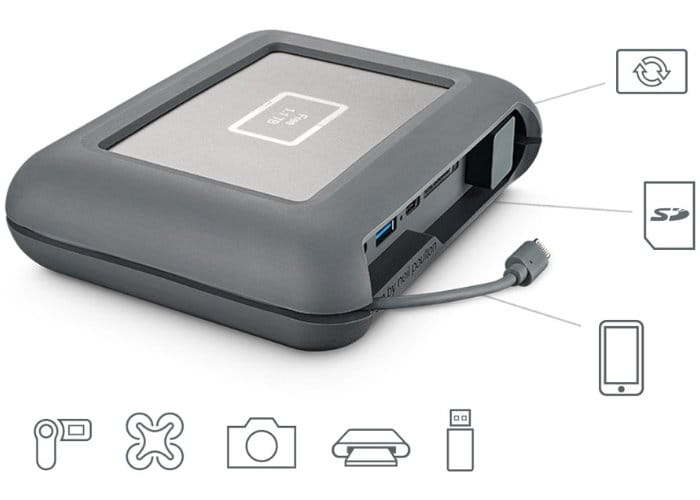 Ok.
Looks nice right?
Even if it’s not orange…. LaCie maybe a Frank Co-Pilot in Orange one day 🙂 ?

But design is not everything (is Apple listening :-), ok that was harsh).
So let’s see what this baby can do.

Copy files from an SD card to the Harddrive.
Connect your camera directly to the device to download files to the Harddrive (wonder if that also works with my Phone, but I see no reason why not)
Talking about phones… it can also charge your phone via the internal battery
And the internal battery can be charged by the included wall charger… but also via the USB-c connector (I don’t know the time difference)
View the images and video via the Android or iOS app
Via the display on the drive itself you can monitor the progress of copying

Now this all breaks or succeeds by the app that is used.
And what I’ve seen so far I’m very excited about it. I don’t expect it to show my RAW sony files full resolution on my Phone, as long as I know they are there it’s more than enough for me, and the app does that flawlessly as far as I’ve seen so far (do remember I don’t have a review unit yet), with video it’s able to playback even 4K video and to be honest this is a very handy thing for me because I can than quickly check if all the video is well recorded and I can record it again if necessary. Of course you can do this also on the camera but I find it much easier via an app. 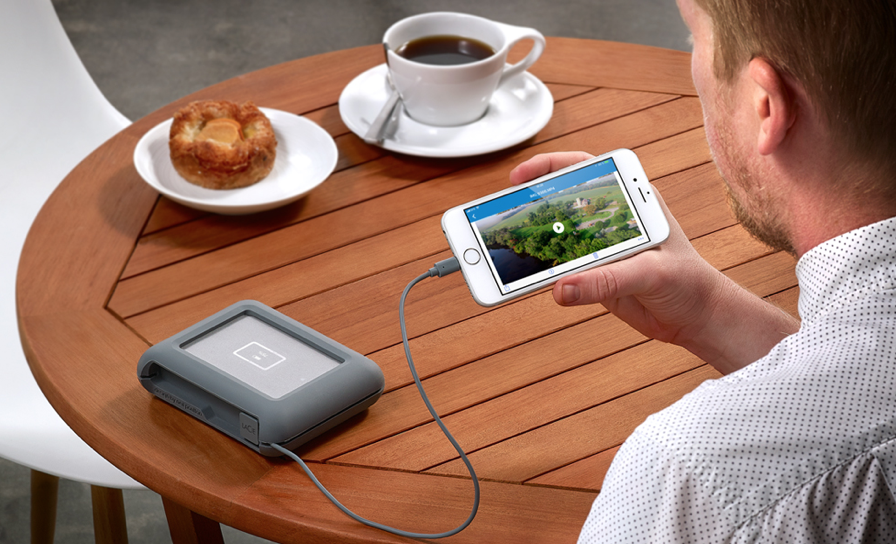 Ok so why am I so looking forward to this product
As mentioned before we shoot a lot, and I’m always afraid of losing my data, with the LaCie DJI Co-Pilot I can now make (incremental) backups whenever I take a rest stop somewhere, let’s say we’re walking in NY and we want a coffee, let’s just backup the card and leave with shop with the feeling that all my files are save, want to watch some video from what we shot, start the app and watch. Want to charge my phone on the road… no problem… just charge.

And the cool thing…. as soon as we are back in the hotel just connect it to my laptop via the fast USB-C connection and….. well it acts like an external harddrive and I can make a mirror copy of all the files on the rugged drive and have my mirror set in tact. For me the LaCie DJI co-pilot will literally mean that one of my Rugged drives will be replaced with this one, and from carrying around “dead weight” just to be sure that we have our images with us, we now actually can make use of that drive that we carry around.

Now what if you’re not obsessed by dataloss
Well let me first say that you absolutely should, but what about people that shoot less images, or even jpgs etc.? Well also for this group there is a huge benefit… you don’t have to bring your laptop anymore, well ok it doesn’t mail, or play games but loads of people just drag their laptops with them on a trip just to backup their images. For a fact I do all my social media and mails on my phone, and use the dictate function a lot, this has transformed my phone actually to the task that was first done with my laptop. So I can imagine that the LaCie DJI Co-Pilot makes it possible for a lot of people to just leave their laptop at home and bring only this on a trip and travel REALLY light. 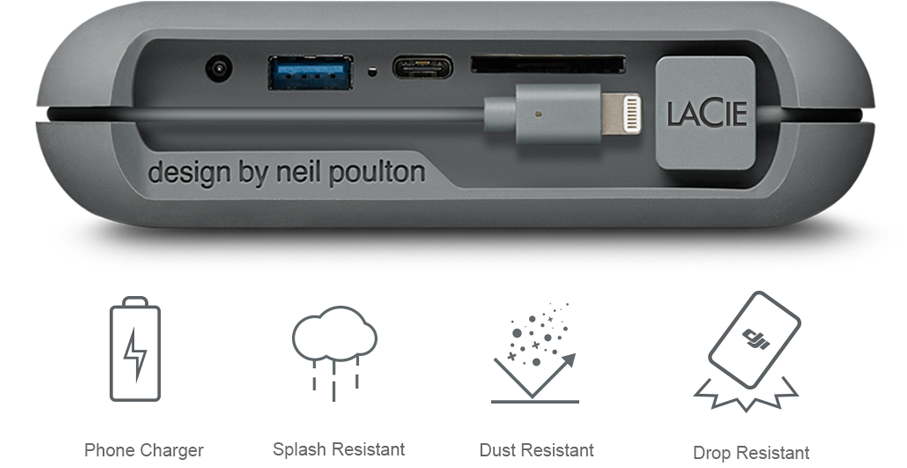 Conclusion
There are many products I love, but not so often are products released that got me excited. I can’t wait to test out the Co-Pilot. I think for ANY travelling photographer, being a smartphone or DSLR shooter and even when you’re out in the field and just want to make sure your files are backuped up the Lacie DJI Co-Pilot will be an amazing new tool for this. A real review will follow soon I hope.

OH…. and I forgot one very important thing.
The LaCie DJI Co-Pilot OF COURSE is covered by the amazing data recovery program from Seagate.
Need more convincing to buy one…….. ?