Today some more information on the camera function of the Sony Xperia Z1 Compact and my experience with Android.

A few weeks ago I was asked to test the Sony Xperia Compact Z1 next to my iPhone 5s and be honest about my experiences.
Well as you know I’m always honest in reviews so let’s see what I think about the phone after a few weeks.

1. Design
I can be short about this.
I like the design, it feels nice and it’s very lightweight. What I really like (and would love Apple to incorporate this) is that the phone is 100% water proof, I’ve already shot some cool shots in the rain with it and with the iPhone I would not have the guts to do this. And let’s be honest you don’t always carry your camera with you in the rain.

2. Screen quality
Compared to the iPhone 5s I think the screen quality is about equal, the Sony is a bit sharper in some areas but I like the color accuracy of the iPhone just a bit more. What I do like is the screen size of the Sony, I don’t believe in phones where you do some extra fitness by carrying a small iPad as phone so for me this screen size is pretty much perfect, maybe a little bit bigger but not too much.

3. The camera
Well it’s a Sony right…
And I think Sony by now already proved they know how to build a sensor and the camera in the Z1 Compact is a very nice one.
With higher ISO I strongly feel the iPhone 5s wins hands down, but as long as the light is pretty nice the Z1 Compact has one heck of a camera, I love it.

The camera has 2 settings, the full auto which will give you a lower resolution but will optimize everything for you, and the full manual (including exposure compensation which I really like) which gives you the full resolution and loads of extra option to play with. Overall I’m more than happy with the camera and it would actually be a reason to carry the Z1 Compact with me just to be able to use it as a camera when I don’t carry anything else.

A shot we recently took in the studio with the Sony.
On my Flickr I have a whole album with images by the way if you want to see more.

So is it all good and dandy?
Well no.
Again I want to be honest in my reviews.

1. Camera button
I love the fact that you can boot up the camera at once from standby and start shooting.
The problem is that whatever I tried I could not get the camera to boot up in manual mode, it kept booting in the full auto mode, so in the end I just decided it was not worth it and I would just open the camera via the screen because that way it did work in manual from the start. Also the camera button often did not respond to my touch.

2. Video
I love the video on the iPhone 5s and I expected something great from the Xperia Z1 Compact but that was a bit of a disappointment.
The video is stuck at 60hz and that’s…. well it… you can’t change it. Meaning if you shoot in a 50hz country the chances are you see some flickering in the image. Another weird thing I encountered was that the files would not open with the Sony movie software on my Sony Vaio Duo13 laptop. Maybe they will update this soon but I love the automated movie making process. In this case I just converted the files into something that the software would understand (which is pretty little I found out) and then it would work, as soon as you figure it out it’s easy but I would have loved to see more interaction. But that’s not the fault of the phone (just an observation).

3. Android
Ok, people will probably flame me for this, but as iOs user I just can’t find many reasons to prefer Android over iOs.
And yeah I know people are like “Android rules and kicks iOs-es you know what” etc. but I work with both now and I normally adapt pretty quick, but it’s just not my thing. Now don’t get me wrong… I don’t tell you it’s bad….. but ….. well let’s look at an example.

In the agenda app on the Sony I can’t use the enter key, meaning I have to type my messages/notes in one long run which is weird.
In some apps I can copy and paste, in some apps I can’t, in some apps it looks like this, in some apps it looks like that.
I know that this is the price you pay for “freedom” but I also think it’s overly complicating things. And yeah I know there a gazzilion agenda apps on the app store but I don’t want to be testing out apps before I find something that works, I just want the enter key in the original app. Now Apple indeed locks you in, all apps have to be approved etc. but I’m honest in this I prefer that a lot over what I experienced with Android now.

1. The option for wearable stuff
Till Apple will release the iWatch (or whatever it will be called) Android wins hands down, just look at the Sony website for their wearable device and I can not tell you how much I think that will be something I would love. But there is way more out there of course (also for Apple by the way).

2. Sporting
Because the phone is 100% waterproof and nice and bright outside I think it’s the perfect sporters phone, the one thing I do like about the way Apple is going is with a lot of attention to “health awareness” with the Sony you already have a lot of options that at the moment are with Apple still under development so I can’t compare this yet but I think the Xperia Z1 Compact at the moment is a great phone for people doing outside sports like cycling, running etc. Although Apple does have the motion sensors better under control……

3. Linking your camera to the phone
This is where the Sony has some cool tricks, the NFC method works pretty well with the A7r, just click them together and there we go instant connection. With the iPhone I have to start an app and make a wifi connection with the camera, it works flawless… but NFC is easier.

4. Linking your phone to the TV or other display
Really cool option, via miracast you can connect your phone to any display supporting Miracast, I already wrote about this in the past, we use a Push2Tv device which retails for about 60.00 US and that will connect to anything with HDMI.

5. Connecting to the PC
Connecting to the PC works fine, to the Mac I run into a lot of hangs, problems and I can’t browse the phone like on windows.
On the Mac I can get my images off and put stuff on the phone, but under windows I can also delete images and the phone/software never crashes. On the Mac the software also always starts with the message I have new firmware…… 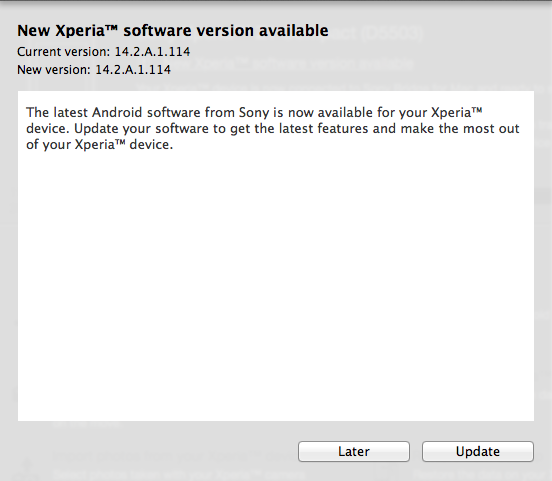 6. Looking at and browsing your photos
Now this is very cool, in the album you can use your finger to control the size of the previews, move them around and it all feels pretty fast, this is really something I fell in love with, on the iPhone there are different apps but I never seen one that does this with the film roll, it rocks.

Overall conclusion after a few weeks
I have to be honest, I love the Sony Xperia Z1 Compact as a phone and camera.
If Sony works on the video part I  think it really has potential.
The overall way the phone works is great, it’s pretty fast, the image quality is very good (very wide viewing angle) and the pictures are really sharp. I do have some adjustment problems with Android but that’s probably personal I’ve been using iPhones since the iPhone 3 so iOs is like second nature. However after 2-3 days I already was used to Android and could find my way around just as fast as with iOs, the main problem I have is the uniformity with the apps and the stability of some apps (I did experience some crashes).

If you are already on Android or looking to switch I would really advise you to check out the Sony Xperia Z1 Compact, I think you will be pleasantly surprised, I think it’s a big phone in a small housing (which is a good thing). If you’re (like me) satisfied with the iPhone series I think there is no real reason to switch, the photos from the Sony are better when shot in good light, but as soon as it’s get darker or if you use the flash the iPhone 5s is much better.

A topic on the light meter Images from Atlanta
Scroll to top
Loading Comments...