Let me start out by saying that I’m horrified by the fact that no-one saw this in reviews. It goes without saying that I always have my doubts with reviewers that review smartphones for photography. I strongly have the opinion that those reviewers hardly take any time to shoot serious stuff with the cameras, maybe it’s because of time constraints or it’s simply because they don’t know about DNG.

Long story short (because I could really rant about this), it’s the reviewers we trust, they often get cameras or other devices before the general public and let’s be honest we often determine our spending on their advice. In the past reviews with the P20 Pro I already had my doubts because according to most reviews the images were not more than ok, and only slightly above for example Samsung and Apple….. from the start I suspected them to use the P20Pro on JPG and 10MP because when I shot the P20Pro I was over the moon with the DNG/RAW files on 40MP, but the 10MP JPGs…… mawh not that much, over processed and not color accurate, actually exactly what the reviewers said. Now when you bring a phone like the P20Pro and now the P30Pro on the market aimed so strongly at photographers I really and I mean REALLY can’t figure out why they don’t give the cameras to real photographers that do real work with it. As soon as the P30Pro was announced I was ready, ready to be amazed, come on this is Huawei a brand 2 years ago I would not think about buying but ever since the P20Pro I’ve been a Huawei fanboy, and no I’m NOT affiliated with them, I paid full retail for my phone and they didn’t even a funky color so I ended up with black.

My p30Pro arrived and I couldn’t wait to test it out, to my horror this was not what I expected, images were horrendous. Not in sharpness or noise, not on JPG those rock, and even the video is A LOT better, but my beloved DNG/RAW files on 40MP with all due respect I have no other name for it than…. not accurate at all, not by a mile. At that point also my frustration started to build, all those reviews, all those people that have millions of views and claim to be professionals in their trade…. is it my device? is it me? so i started asking around online, now not a lot of people owned the P30Pro but the once that did to my surprise ALL confirmed that reds were indeed funky, and trust me it’s not just the reds.

Ok so what’s going on?

In essence it’s not that hard to figure out.
The P30Pro is using a new sensor, let’s keep it simple.
A normal sensor captures RGB (often in a Bayer pattern), but this new sensor captures RYYB, meaning not Red, Green and Blue but Red, Yellow, Yellow, Blue. In essence this means more light capture but it also brings a problem. In a balanced colorspace we work with a blackbody curve on which our white point sits (often revered as D65, or 65K or 6500) When you draw a line through these points you end up with a balanced system where Red connects with Cyan, Blue connects with Yellow and Green connects with Magenta. let’s visualize this, this is a REC709 colorspace rendered in 2D. Just ignore the dots, it’s a report from one of my ISF calibrations. 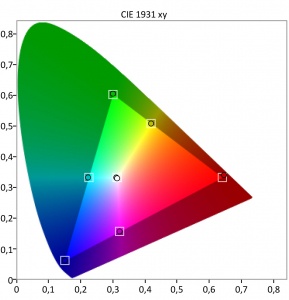 As you can see, the primaries colors are RGB and the secondary colors are CMY.
Normally a colorspace is 3 dimensional. This means that every color has a fixed coordinate, for red REC 709 for example this is

And this goes for everything. So Adobe RGB, ProPhoto RGB, REC709, BT2020, P3 etc. all colorspaces that have fixed coordinates for the colors, this way we always know where the colors should be. Now we can manipulate these colors actually pretty simple. Because it’s a 3 Dimensional colorspace we use the so called HSL settings to get the colors in their position. (Hue, Saturation, Luminance) Now this is not the complete story, because there is also something called Gamma but let’s keep it “simple” for now.

Ok so the first images I took with the P30 Pro looked like this.
First the RAW file without any adjustments and after that the JPG and although the JPG is slightly over saturated it’s actually pretty accurate, that thing is really really red. 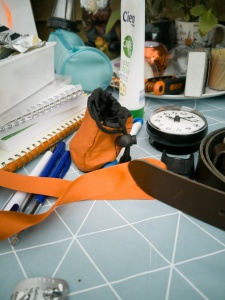 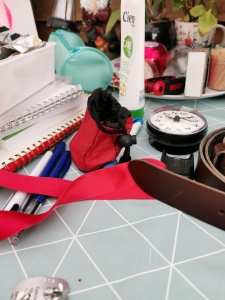 Ok so you don’t have to be a genius to see that this is not right, and again I really can’t understand why no “professional”  reviewer did not see this.
In essence what’s probably going wrong is that by creating green out of the yellow they shift red towards orange (which is what you see) however when you look closely you see that also blues and cyans are affected, which is to be expected seeing a colorspace is a “balance” thing, if the balance is not 100% ALL colors shift.

Now this got me thinking.
Some people said it must be a problem with the sensor, but that doesn’t make any sense at all. Think about it, the RAW file is captured, and from there the JPG is created, not the other way around, so why would the RAW file be wrong and the JPG correct. The weird thing however is that both in the native app on the P30Pro as in Lightroom CC as in Capture One the P30Pro files just are wrong.

At first of course you panic and you think the worst.
But let’s be honest, what is the first thing I learn you guys when you visit my channel/workshops etc.?
right always calibrate your screen and use the colorcheckers. So I decided to do the same thing but now with my P30Pro.

This is shot with the Xrite colorchecker SG
This is a really nice colorchecker with plenty of patches so you can create nice smooth correction files. 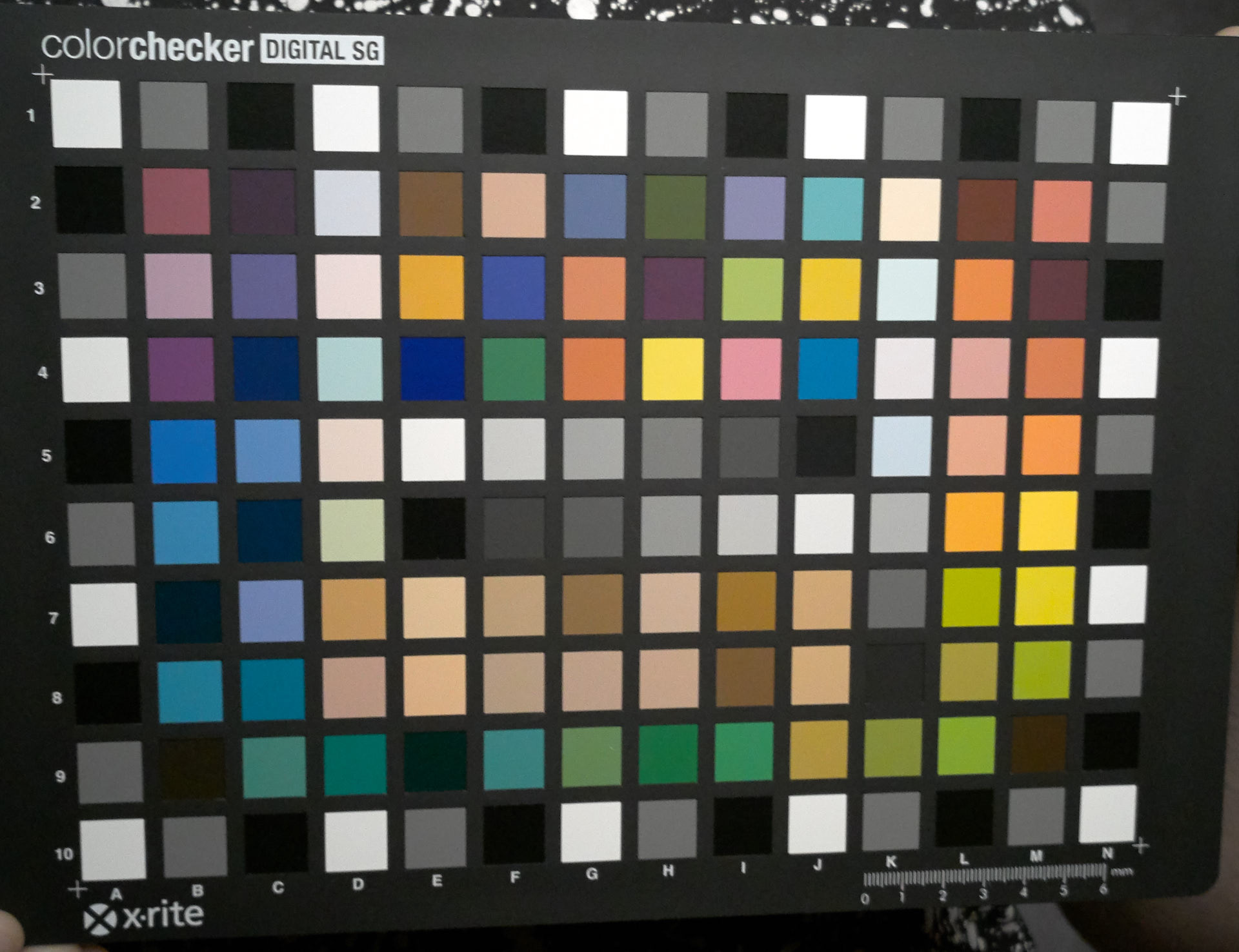 Now this is a HUGE mess, reds, skintones, blues… well let’s be fair almost every color is totally wrong, and not for a small amount.
Luckily Xrite delivers some really nice software to create custom profiles. And it’s not hard, just export from Lightroom, or Capture One and the software does it’s magic. And indeed… voila.
same Raw file 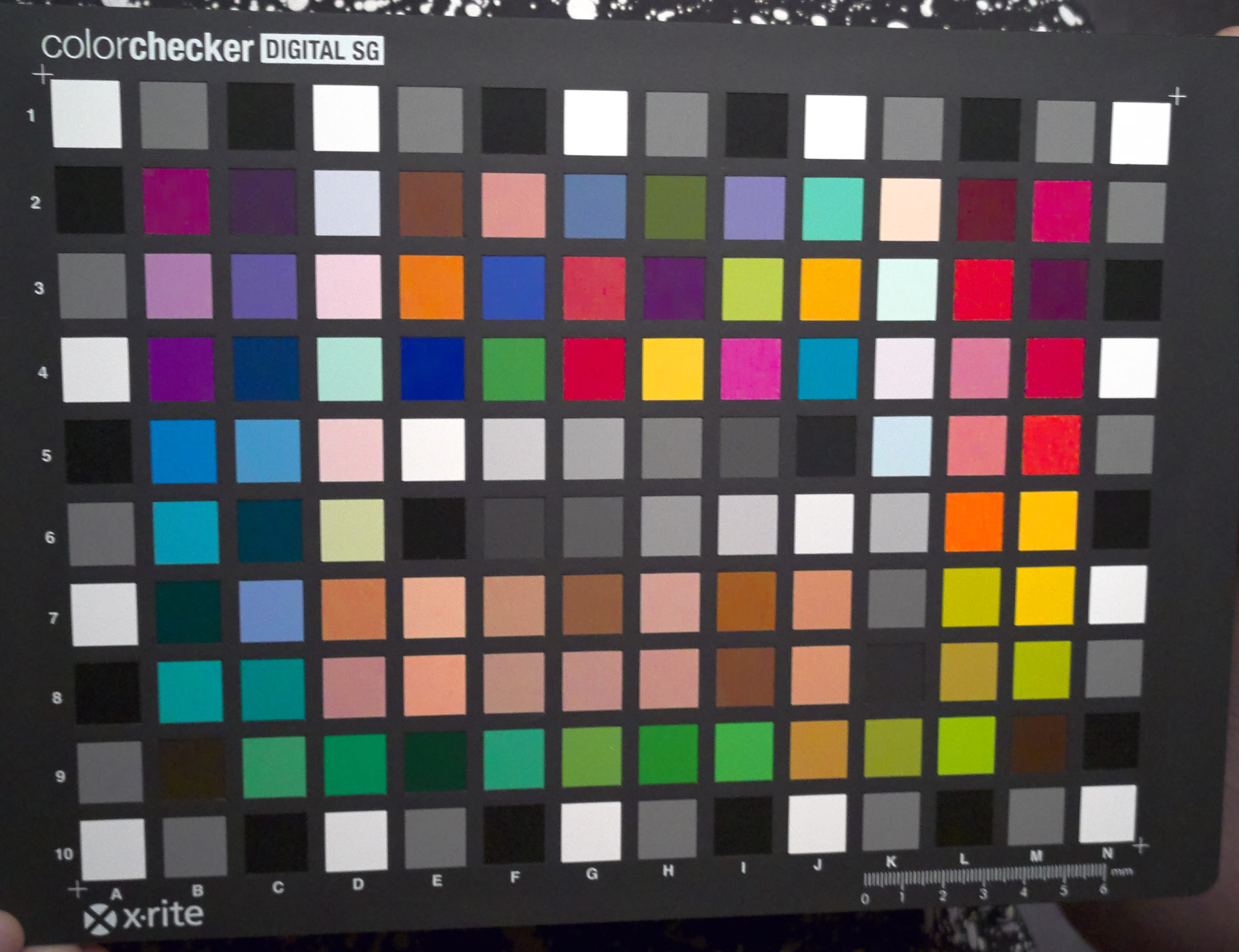 And there we go, now this is something I recognize.

So what do we do?
Well until Huawei somehow fixes their RAW/DNG files (and that shouldn’t be hard seeing it’s only a wrong profiling) you will have to use a separate profile for your DNGs. And again its really easy to build and in all honesty if you’re serious about photography you probably already own a colorchecker.

So is this it?
no I wish, there still is a huge problem for P30Pro owners. Although the files are not lost and you can easily correct them you do have to realize that this is a problem that is very serious, all the apps on your phone that are able to work with RAW files like for example Snapseed, Lightroom CC etc. will all suffer from problems when you open the files directly, meaning editing the RAWs on your phone is NOT possible (if you want accurate colors), so Huawei really has to change this in software and create a proper ICC profile for their DNG files. Luckily this is solvable with software, it’s simply put creating a correct correction file and it’s done. So let’s hope that this maybe helps a bit.

Now what do I think of the phone?
It’s awesome. Love the new screen and look, it’s blazingly fast, it’s even able to decode 1080P .ts streams on the fly to cast to chromecast without any hickups, video looks really nice and smooth in 4K and stunning stabilization in 1080. Fingerprint sensor just works and the camera…. oh man really don’t start about the cameras.

Having a wide angle, standard and 5-10x zoom is just plain awesome.
I would love to have the wide and standard on 40MP but let’s be honest 20MP wide and 40MP is pretty cool too. Oh and the selfie camera is also great (finally)

Just fix the colors on your main MAJOR selling point sensor.
Oh and next time…. maybe first send a device to people that know how to shoot RAW 🙂 (hint hint)

As always feel free to leave comments below. I’ll post some images soon which I took with the camera, but trust me…. run to the store and get one.

Next to the 2 hour monthly broadcasts from “Digital classroom” we also broadcast several smaller episodes at random dates, often containing tips, Q&A etc. See it as a boosted version of Periscope 😀

In this episode tips on :
Finding and working with models
The X-rite ColorChecker passport
The iPad pro and the always going war between xxxx vs Apple
And a solution to shoot tethered wireless with the A7RII
Please feel free to comment, subscribe and share the link.
Digital classroom is made possible by BenQ and Rogue/Expoimaging.

One of the hardest things for some people is choosing the right monitor.
And now that you own it…. what do you do with it?
And what is that stuff about calibration?

As you can see, it’s not as easy as “wow this one looks great, let’s get that one”
In this episode of “Quite Frankly” I give you some tips and tricks for choosing the right monitor, calibrating it and how an analyzer works.

A few weeks ago I did a webinar with Rosa for our friends of X-rite.
Today some images from this webinar and a link to the webinar in case you missed it.
Webinar link : http://vimeo.com/xrite/review/97518749/d057f4a937 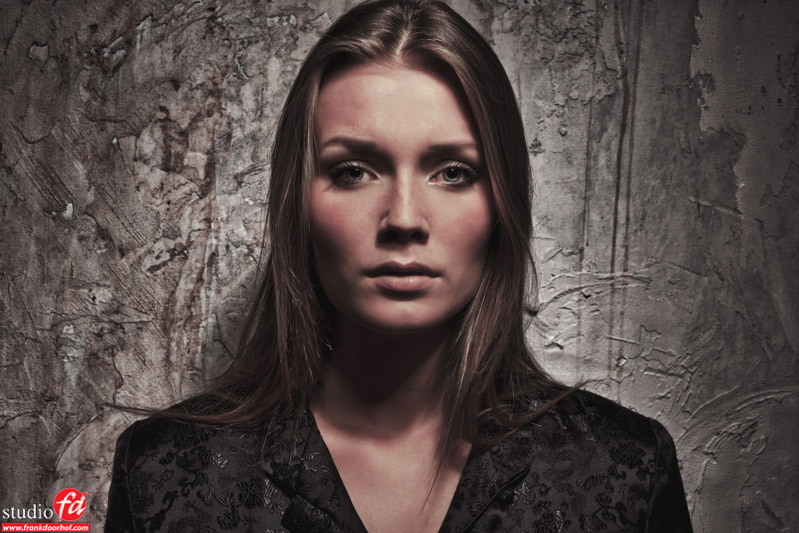