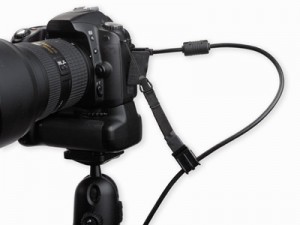 Many people who know me will know that I’m a big advocate for shooting tethered in the studio and if possible also on location.
Some people will say it’s a hassle to setup a notebook and shooting with a wire is so limiting, I have to agree with this at first, but still I strongly believe that the negatives are nothing compared to the benefits of shooting tethered.

When shooting tethered we have a totally different workflow.
First of all it’s a lot faster in real live, when shooting on the card I find myself shooting more images simply to make 100% sure I’ve got the shot. When I shoot tethered I can see what I’m doing on large screen were I can zoom in on the RAW files to 100% but there is more of course…..

I’ve done a lot of location and studio shoots were my customer had a certain look in mind, often this is for example a toning, black and white or a simple other adjustment. When shooting tethered I can easily attach a profile to the incoming shots meaning that if I made the look the client wants on one image, all other images coming in will have the same look.
Now imagine you are shooting for a cover.
Your client wants to see the final product of course to see if the cover looks ok, when shooting tethered this is no problem. Take for example Capture One, my personal favorite software package for shooting tethered. In Capture One you can overlay an image on top of the incoming shots, this way you can show your client (or yourself) exactly how the crop, and compositions work in the final product.

But there is even more…..
Today almost everyone owns a so called smart phone (I wonder when they drop the Phone part because to be honest I hardly use my phone to make calls anymore, 90% of it’s use is Ping, mail or internet), but anyway let’s keep on topic, with for example the iPhone and iPad it’s possible to link your phone or iPad to the workstation to function as a display device. This means that your client or team members can see what you’re doing, browse the images, flag them etc. The nice thing is that if you have for example 3 iPhones within your team your assistant still can see the images coming in and check for example focus etc. while the others are looking at totally different images. For me this is a killer app during workshops and demos. We carry two iPads and iPhones with us to some demonstrations and ask the people owning one themselves to download the free app and they have their personal image device allowing them to zoom in and see exactly what I’m doing without having to team up to look over my shoulder on the display of the camera or the laptop.
Are there no negative sides to shooting tethered ?
Yes there are:
1. You’re connected to your laptop with a firewire or USB cable
2. You have to realize that your laptop battery can run down very quickly when using it to shoot tethered.
But there are solutions for this of course.

Battery power
This one is rather expensive but doable.
There are several manufactures that are selling external battery packs, I’m using the applejuize myself, it gives me app 3 1/2 hours of shooting time before my laptop runs on it’s own battery, that’s by the way with the display on full brightness, the laptop itself runs my back for app 3 hours without problems, with other words, with this combination you will not be likely to run out of “juice”.

I would like to post a warning however in this blog post and that’s for the company BATTERY-GEEK don’t ever buy something from them.
I ordered and paid a unit there over a year ago, and they pushed the delivery time forward and forward and after 40 days I could not get in contact with them anymore, very strange you could think until you realize that after 40 days you can’t get your money back from Paypal…….
I did got into contact with them a few months ago via another email adres claiming to be interested, when I started about my order that never was delivered it was complete radio silence again, also spoke to a telephone operator from them and the same happened, start about an order you never received and the connection is lost or they will call you back and never do…. so DON’T buy from them !!!

Wifi ?
In the past I’ve shot with wifi on my Canon 20D and a short while on the 5DMKI, and I have to say at that time it was ok, but already on the 5DMKI it took me way too long to have my images over to the laptop, one could say to shoot RAW on the card and send over the JPGs but for me that is not the way to work because we often already make selections during the shoot and delete or flag images. 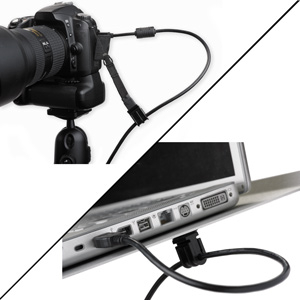 Tether tools
When you shoot tether the biggest risk is that your cable gets disconnected from your camera.
In the best case you will reconnect and shoot further (often loosing all the images in the buffer), however in the worst case scenario you will destroy your USB or firewire port from the camera or laptop. That’s of course something we don’t want….. but how to solve this ?

There has been many solutions made by other people and myself, and although some worked to a certain extend they were all let’s say, far from perfect or handy.
So enter the perfect solution, enter tether tools.

Tether tools is a company that has an unique assortment of tools you can’t live without when you’re shooting tethered, you can see their whole product range on : http://www.tethertools.com/ At the moment I’m using the Jerkstopper USB version. In my opinion you REALLY can’t live without this.
One part is connected to your camera and releases the “stress” on the cable going into your camera, the other part is connected to your laptop or workstation. I’m using the USB version that connects to a spare USB port and routes the cable via this plug, they also sell a glue on connector or a connector for the network connector. Because I switch locations often and use the network connector I opted for the USB version and as mentioned before I love it.
Now most of the time something simple and unique will cost you an arm and a leg, but that’s the nice thing with tether tools, the pricing is on the low side making the investment into the products more and more a must have. And seeing the risk that not using it will bring with it I would say that using something like this is as important as making a backup.

Conclusion
Shooting tethered is something that a lot of photographers don’t do, simply because they think it takes too much time. When looking at the real world applications however my opinion is that is saves a lot of time and you know that when you’re done with the shoot you nailed the images. I do have to add that if you’re walking around a lot on a location shooting tethered can be a problematic solution, I do own a small moveable cart on which I have my laptop secured and that can also be driven in rough terrain but I will often still choose to shoot on the card on those locations and walk to the laptop setup to download the card in between sessions. EVERY location however where I know I will be shooting from fixed locations I will shoot tethered.

The best tip I can give you if you’ve never shot tethered is to try it, you will love it.
And you don’t need any investment in most cases.
For Canon users on the solution DVD there is a software package called DPP, it supports tethered shooting for most Canons, Nikon users will have to buy/download a separate package, BUT…. when you’re using Aperture or Lightroom changes are that you don’t need anything else.
Remember however that USB is not a very good connection over 5mtrs in length, you will need a so called USB repeater cable, this cable uses an active box at the end of the cable that makes sure you can connect another repeater cable or the cable to your camera without loosing images, don’t by the cheap USB cables that are longer that 5mtrs, they will work sometimes but in the end they will always cause problems.

Tethertools and StudioFD/ITC
Because we love the tethertools products my wife’s company ITC will start selling them to the Dutch/European students and I will promote the brand on my workshops and demos. If you live in Europe or the Netherlands mail ITC at itctd@itccomp.nl to order your tethertools products.