In the previous review I took you guys to the beachcombers museum and we looked at how the lens performed in a museum like visit, today we’re gonna see how well it performed outside while walking around, something I think most people will do while on a trip or vacation.

One of the things I find very important in a lens is the overal image quality, now with most cheap lenses or other super zooms you will always have a tradeoff, this is very easy to explain of course, you pay a lot less money or you get a lot more zoom so that will cost you quality. The question is “how much of this quality are you willing to sacrifice?”

Image quality
In all honesty I didn’t expect the world of this lens, I wanted to test it for the simple reason that you always hope for something spectacular but I expected it to go back to Sony with the idea of “It was a nice lens to look at but… not my thing” however during the test I grew actually very fond of the lens. One of the things I’m very picky about is sharpness, I didn’t expect the same sharpness as the 24-75 Zeiss but the 24-240 actually surprised me (a lot), even wide open the images only need a little bit of sharpening to give you sharp images on the wide end and fair sharp images on the long end. The image stabilization helps with the longer shutter speeds and on the long end, also focussing the lens becomes a lot easier because it’s an optical stabilizer and not the in body stabilizer that some Sony cameras use, meaning you can actually SEE the stabilizer work, making it easier to “focus” on your subject. I’m “always” using center focus point and keeping that on your subject if it moves is just that much easier with an optically stabilized lens.

The contrast of the images is very good and so are the colors.
There is some distortion and chromatic aberration but in “the modern workflow” with todays RAW convertors everything is actually easily/automaticly fixed, actually when using DxO optics 10 you can see the images “popping” in to the correct look. The one thing I did notice on a lot of shots is some shading from the lens hood so I would actually advise you to remove this when shooting wide (also mentioned in yesterdays blogpost).

The perfect walk around lens?
Walking around with a lens with 10x optical zoom makes you much more flexible, I know there are a lot of people out there that will claim that primes are much sharper/faster etc. and indeed they are 100% right, I also have and use primes. However when walking the streets of for example New York (or Emmeloord) a prime is a lens I find very limiting for myself, and I know this is a personal matter, I know a lot of people that love the fixed lens cameras and they can’t all be wrong of course, for me however I love to switch between closeups and wide shots. As mentioned in yesterdays review I used the Minolta 35-200 a lot on my A99 but I always found that lens a bit limiting in the wide segment I sometimes just wanted a little bit more wide options, with the Sony 24-240 it really hits the sweet spot, the 24 is what I would normally label as “I don’t need to go wider in most cases” and the 240 is just awesome to have for bringing in details or shooting someones portrait without coming to close. When I want wider I can always switch for the Sigma 12-24 (which I love) and when I need longer I’m often in situations where I will probably only use a longer lens (for example when shooting birds or wild life).

During our trip in Texel I found that I never really wanted to go wider, I also only once switched to the 70-400 and that was in a wild life reserve where I wanted to get it all just a little bit closer, for most tourists, day trip people etc. I can hardly imagine however that you would ever want to switch lenses during normal daytime shooting. For me the 24-240 grew on me and at the moment I’m really fond of the lens and would love to take it out on the streets in a city like New York, there are so many options to shoot there and this range would just give me endless oppertunities.
And indeed a prime is much faster and much sharper… but in the end it’s all about one thing that matters…. getting the shot and with a 10x zoom you have many options to shoot the same scene, and that’s something I really love.

Tomorrow part III with some bird shots… and the not so nice review about the 24-240. Hey after 2 positives I can be negative for once right 😀

This weekend we visited Texel in the Netherlands to test the new Sony 24-240 lens (E mount) on my A7r.
During this week I’ll show you some images and give you information about my experience with this special lens, in the end I’ll give a full conclusion review with some 100% crops. Annewiek also filmed a video review on the lens with the new Sony 4K cam corder, she is working on the video and we hope to have this also online this week.

Today let’s start with Part I.

The 24-240
Let me start by saying that my dream lens would be a 10-400 F2.8 in a small and handy package, but in all reality that will “never” happen, so you will have to settle for something less. Over the years I’ve tested some so called “Superzooms” and to be honest I was never really impressed, of course it’s cool to have a long range so you don’t have to switch lenses but in most of the cases the image quality was so subpar that I lost all interest in the lens the moment I openend up the images in Photoshop. Also a lot of the superzooms are incredibly slow with focussing taking away that special moment I need with street photography.

When Sony announced the 24-240 my first response was of course… “let’s try it, but it will probably disappoint”, and this is the way I started this review. I can already tell you that this will not be a HALLELUJA review, I’m always honest in my reviews and this one will be no exception.

The lens itself
The build quality of the lens is nice, everything is nice and smooth and the 24-240 has the cool Sony feature that if you turn the focus dial the EVF gives you a magnified view to really pinpoint your focus where and how you want it, this is one of the things I LOVE about the EVF, if you (like me) love to work with manual focus lenses this is without a doubt one of the major selling points. 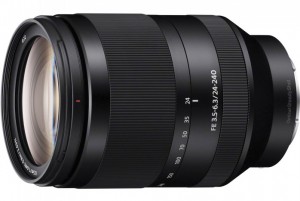 The “speed” of the lens is 3.5 to 6.3 which according to some will be too slow… but wait.
Yes indeed it’s not a 2.8 lens but we are talking about a 10x zoom lens, the nice thing however with this lens is that the lens also has an Optical Stabilization system on board which makes it possible to shoot on lower shutter speeds and this helps with the “slowness” of the lens.

Again as mentioned before I would love the lens to be a constant F2.8 or F4 but in all reality the lens would be much more expensive and MUCH more heavy and that would take away the reason I love this lens, when traveling having one lens on your camera which is “small” and lightweight is a very big bonus.

Most of all I care about sharpness and focus speed, because this is actually were most superzooms I tested failed miserably, actually the only superzoom I ever liked was the Minolta 35-200 which is pretty sharp and also reasonably fast, the problem with this lens is however that it does work on my A99 but not via the convertor on my A7r due to the motorzoom so I can’t use that lens on my favorite walk around camera the A7r. For the 24-240 I can say I was more than pleasantly surprised, the 24-240 is surprisingly sharp, I will not say it rivals the 24-75 Zeiss but this is not what you expect from a superzoom, even wide open the images only need a little bit of sharpening to come out “sharp”, on the wide end I would rate the lens as “good” and on the long end as “fair”, or in other words (when stopped down it gets a lot better), without any hesitation I would use this lens as my walk around lens. The contrast is great, the color is good (but I always adjust this later) and the distortions are easily corrected by Lightroom or DxO (the ones I tested).

Autofocus is another story
Now I tested this lens on the A7r and the A7r is not the best AF camera Sony has on the market, I don’t use a lot of E-mount lenses and for the A mount lenses I use the convertor with the SLT mirror which speeds up the AF a lot. During the trip I found a few situations where the 24-240 on the longer end really was slow with focussing but overal as a walk around lens I didn’t miss any shots, I did try to shoot some birds with it and…. well I’ll show you that in a next blogpost but let me put it this way, it’s not a birding lens although I managed to get some really cool keepers.

The Jutters museum Flora
During this trip we were guided by one of Texels best photographers Stefan Kroft, and one of the sites we visited was the Jutters Museum Flora.

The translation for Jutter is actually Beachcomber and this translates indeed pretty well. What these people do is walk around the beaches and find stuff that “the sea gives to them”, or in essence they take the stuff that floats ashore from ships that lost it or ships that sank or got in trouble. Of course there are very cool stories like the time when there were hundreds of shoes ashore but they were only left shoes… it makes you wonder what happened to the right ones right ?

Today I want to show you some images I took inside the museum.
All images were shot with the Sony 24-240 lens on the Sony A7r.

The test for me was to see in how far I would be limited by the lens inside and outside with some lens flare tests and of course if I would feel the need to switch lenses. During the whole trip I carried also my 75-400 (which I used once) and the Zeiss 24-75 f2.8 which I used… zero times (much to my surprise). Due to the smaller aperture I was forced to shoot on slightly higher ISOs in some cases but in all honestly the A7r is pretty good with high ISOs and when combined with the new MacPhun Noiseless or DxO optics Pro noise is not really an ISO anymore for me, of course you can still see some noise when pixel peeping on the screen but when printing up to A2 I hardly see any noise up to ISO6400 and I even have some 12800 shots that printed incredibly good after going through DxO’s prime noise reduction.

All shots were edited with DxO optics 10 and tinted with DxO filmpack.
Click on one of the images to go to the gallery.