One of the main reasons I switched from the Mac back to the PC was very simple.
It had nothing to do with the fact I did not like MacOS, but it was the fact that my workhorse, the MacBookPro, was severly butchered by Apple. Taking away the magsafe, bad keyboard, no more ports like HDMI, standard USB and taking away the card readers…. and raising the prices again to an “insane” level….

But we are a few years further and Apple has done some very cool things.
Over the last year I’ve been using an iPad pro almost exclusively for all my work, including video and photo editing, but also creating and recording music, consuming media etc. it’s just an awesome device, but…. there is also a huge problem with the iPad pro if you want to use professionally.

With the release of the M1 chip things have changed a lot for me, and we are even thinking about getting the new MacBookPro for me when it’s released lated this year (or next year), but that also brings me to the reason for this review.

More and more I’m using my iPad pro, and where I in the past would only use it on my lap it’s now also often found on my desk connected to a wired network connection (for the NAS), an external monitor, keyboard and mouse and of course a nice audio interface. It’s actually quite impressive to see what you can do with the iPad pro, and also a bit frustrating that Apple still limits the usage on an external monitor to a the iPads aspect ratio, meaning black bars on the side, but let’s hope things will change soon. In fact when you look at the new way the Mac connects to the iPad as a second display and knowing both are running the same chips (language) I think (if Apple doesn’t close it all off) the future is very bright for creatives using Apple gear, and it’s one of the things that really drives me back to the Mac (although I love my Windows setup).

Anyway back on topic
One of the issue I run into almost daily is connectivity.
When working on the coach or in the RV it’s not a big deal, you simple connect an external Harddrive and when I need to use something else with USB you can use a USB dongle or just get a small convertor/dongle that supports several connections like for example something like this. 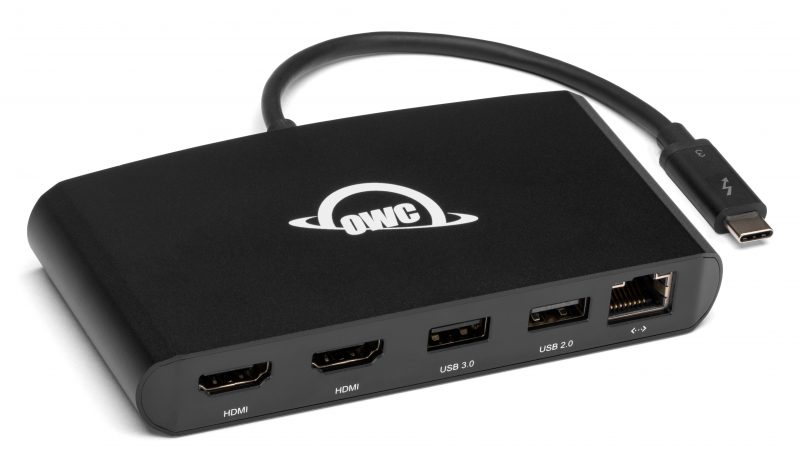 And trust me they work ok.
But they don’t do everything you need.
I actually have several of these kind of dongles and when I combine them all, I can attach everything, but I never found one that did it all (without problems), for example I have one that supports USB, USB-C, HDMI and Network, but…. that one can’t charge my laptop or iPad, so I’m limited to my battery life (which is pretty ok, but still). Now when we travel it’s not really a big deal, we use the dongles only a short period during for example a presentation, or to connect an audio interface.

But when I’m home or in the studio I want a solution that makes my iPad pro or MacBookPro completely capable to do whatever I want, without thinking about charging, network or whatever.

As mentioned before I’ve tried several solutions and never found one that did it all, without issues.

Enter the OWC Thunderbolt dock 3
First thing you have to realize is that this is not a portable device. It’s build like a tank, and it has a pretty large powerbrick. So this is really a device for the desktop, but that’s exactly what I need. So lets first take a look at the unit itself. 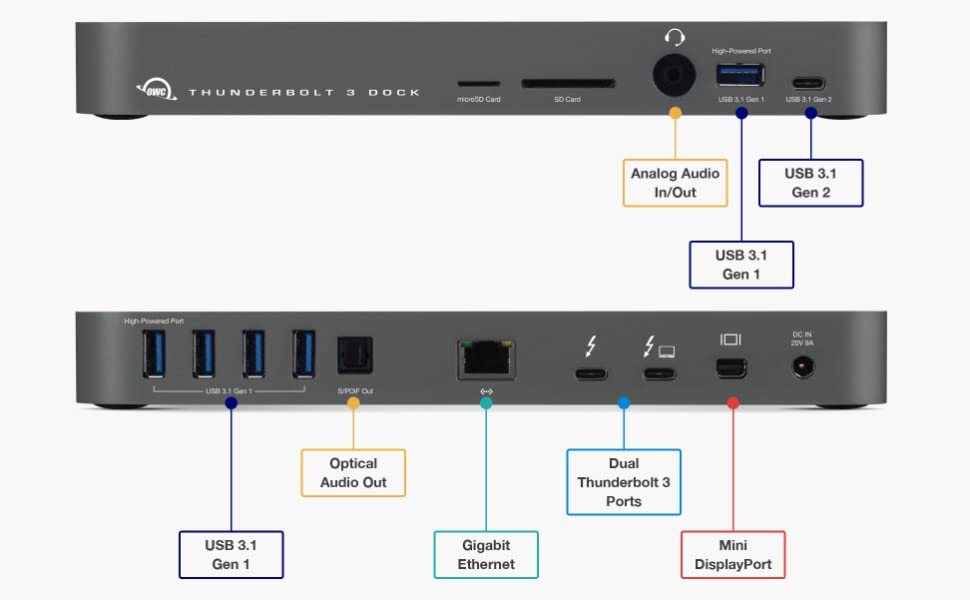 Ok as you can see, we have more than enough options here, including a working powersupply for a MacBookPro and also my iPad pro works like a charm, however I have to add that I cannot get my Dell XPS 9570 i9 to work with the dock, this could be a problem with my thunderbolt drivers, we are still looking into this issue, and I’ll update the review when I solved it.

The dock is very complete with I think almost everything you’ll ever need, and I love the idea that the dock is powered, somehow I never trust passive docks in the long run when recording music for longer stretches.

The main advantages from docks like this is that you can place it on the desk and forget about it. Just run one Thunderbolt Cable from the dock to your laptop or iPad and you’re done. For me this is an insanely handy option because with one cable I now litterally keep my whole setup in tact, same keyboard/mouse/monitor/network/external drives etc. as on the laptop, meaning it’s a very seamless experience switching between devices.

So how does the dock work
Well what can you say. You connect the power, and connect all the hardware you need and…. well that’s it.
What I really like about this dock is however that on the front I can find a cardreader for both SD and MicroSD, an analog audio in/out and of course a standard USB3.1 and a USB3.1 Gen2 connection. This makes it really easy to quickly connect an external harddrive or of course empty your cards.

The speed is very good, compared to some of my previous dongles it now finally feels like I’m working on an SSD instead of an old spinner drive (ok I do overreact a bit, but it’s just a lot snappier), also with my previous dock I had to reset my audio interface sometimes because it just doesn’t want to keep the clock correct (sample rate), on the OWC I did not yet experience this, big tumbs up.

For video you are able to connect a monitor running up to 4K60 which is very nice for a dock. Do remember that unless you are a gamer 4K60 is more than enough for both videoediting as working on your photo’s. 4K30 would also not be a problem, but personally I rather have the 60hz version.
Power to the laptop or iPad is 85W, which will keep your MacBookPro charged constantly even under a heavy load, and trust me you don’t want to see your battery running down while streaming live (yes it happened to us).

Ofcourse you can daisy chain your Thunderbolt port, and the front USB port even charges your phone or tablet when connected.
Also the headphone/mic connector on the front can be very handy when doing zoom meetings (and we all do those a lot recently).
Now wired network might not be a big deal when you don’t copy large files, but try copying 30GB over wifi and get back to me… when you’re done, and now do the same thing over a wired connection… you never want to go back (and we use a lot of data stored on the NAS).

Can it be improved?
Heck yeah, of course, everything can.
One of the things I read a lot online is the fact OWC opted for a mini display port instead of the more standard availablee HDMI connector. Well I agree and disagree, for me personally it’s not a really big deal. Most monitors will also be outfitted with a mini display port and for example BenQ (the monitors I use) in most cases also delivers the cable in the box. If you don’t have a cable you do have to take into account the extra cost which is under 20.00 euros, depending on the option you choose (do make sure you get the 4K version and not a full HD version)

One thing I do really would have loved to see changed is the delivered Thunderbolt cable, with 50cm that is really way too short if you want to be able to place the dock a bit more freely on your desk or for example a bit higher than the connected device, and changing that cable… well is a bit more expensive, for a good cable you really have to add between 40-50 euros to the costs of the dock, but if you can use the 50cm version that’s not necessary of course, in my situation it’s matter of switching some places on the desk and it worked, but it’s tight. Luckily you can easily switch the cable, just make sure you get the right cable and not a cheap USB-c Cable.

Conclusion
It’s not possible to deny that now a days you really need a dock.
It’s a simple fact of life that laptops and tablets are getting less and less connectivity while we as users need even more than in the past. Luckily companies like OWC don’t only think about the “consumer” part, where wifi is fast enough, but also about the pros using their gear.

The OWC Thunderbolt 3 dock is not the cheapest on the market, but for what you get… it’s worth every penny I would say, although for us it would be cents 🙂
If you’re like me running a laptop and tablet as your main devices, just skip all the cheaper solutions, I think I spend over 300.00 on docks and dongles that simply don’t work in the home situation, the OWC Thunderbolt 3 dock does and it’s also very complete with all the connections one could wish, plus it charges with 85W which is a big deal when you really push your gear.

I would say “Highly Recommended”
Thx to OWC for giving me the oppertunity to test the TB3 dock.

Today the results from the digital classroom we did with Rebecca.

I think we will see her returning a lot 😉