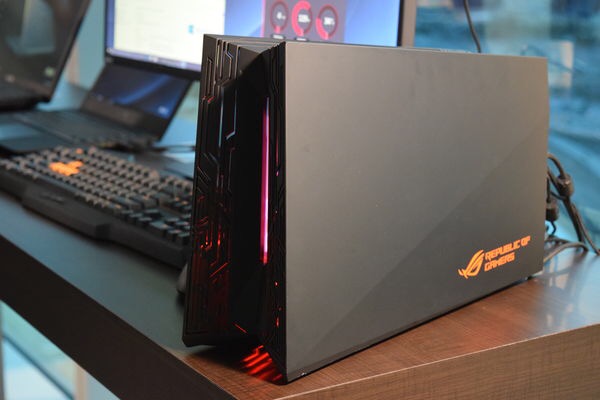 Just a thought. Now that Apple stopped production of screens, airports and is investing a lot of time in the MacBooks could this be the future they have in mind ?

One MacBook that’s “very powerful” that you connect to a dock at home and a third party monitor and take with you at night or when you need to be mobile?

Bare with me. I think this is not as bad as it sounds. When you see the power we now have with small footprints and with the simple fact that a totally specked out mbp beats the iMacs it wouldn’t be a bad idea of course. In fact Annewiek is actually switching to a similar situation where she will be using her mbp in a dock with a 32″ benq monitor.

For her workflow it makes a lot of sense because now she’s constantly switching between the machines and is always missing something that’s on the other machine.

In fact I think that for 90% of the market this is actually the perfect workflow. Why have two machines if you can have it all in a very powerful laptop.

The thing missing is however the heavy load workers. 3D Animators, 4K multicam editing. On the other hand that also doesn’t work smooth on an iMac and you need a Macpro for that….. unless.

What IF Apple (or a third party) would release an USB-c device that houses a really fast GPU, CPU and memory that makes it possible to work with the same machine as a toned down very powerful laptop mobile and when connected to the dock it becomes in essence a Macpro. In fact when you do a search online these boxes already are announced or already are on the market. Still you don’t hear a lot about it.

IF that is the future I would be 100% for it. It is a bit weird of course to have two machines. When I do a shoot on location I have to empty my mbp to the Macpro, when retouching you now can have version differences on both machines. When Apple indeed goes this route it would be a tremendous step forwards for pro and heavy users in ease of operation.
Imagine using the same machine for everything. On the road the keyboard of the mbp in the studio just connect it to the dock where the external storage, keyboard, monitors and extra power is. Sounds great right?

What do you think?
Will the new Macpro be an USB-c box with the brains that’s connected to a mbp?
For example

https://www.google.nl/amp/s/9to5mac.com/2016/08/24/macbook-pro-external-gpu-kickstarter-wolfe/amp/?client=safari
Maybe it’s time to sell the Macpro and go for this if you don’t need more than 16gb of ram?
Only other problem I see for the moment is running 3 displays from one connector. As far as I can see there are still no docks that connect to one tb3 port and give you 3 display ports for example. But that would mean instead of connecting just one cable it would mean attaching 2-3.