As many of you asked me about 3rd party glass on the Sony I’ve decided to do some testing this weekend with different convertors and glass.
Many thanks to our friends at CameraNU.nl for lending us the convertors.
Before you look at the samples do remember that the samples (and crops) are not straight out of the camera… well almost, the only thing I do with retouching is change the color and retouch the skin, so there is no “freaky” stuff going on, all retouching I do is always done within a few minutes per shot, for the crops it doesn’t matter but I did want to mention it.

Now the first thing I REALLY like about the A7r is the compatibility with so many different lenses out there, with the Kipon convertors I already can mount M42, Leica M and Leica R glass but with the Metabones convertors you can even mount Nikon and Canon glass (including the AF on some lenses from Canon, but VERY slow) which makes this system I think the best camera out there for compatibility, I know a lot of Leica shooters out there are drooling over the option to use their glass on a 36MP camera with the dynamic range of the Sony.

The first test is with a Kipon convertor for Leica R glass.
Here you see the two cameras next to each other. 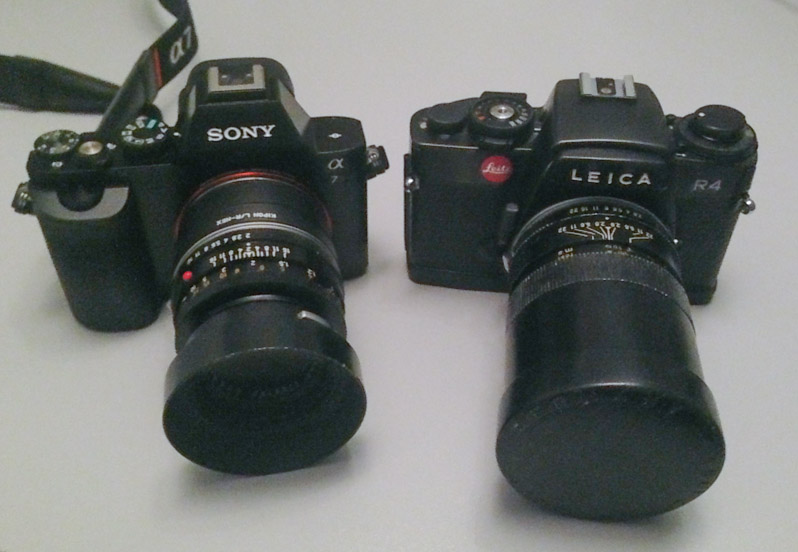 On the Sony you see the 50mm f2.0 with Kipon and on the R4 a 135mm lens.
As you can see the Kipon does add some “body” to the A7r but it’s still a nicely balanced combination, and even with the 135mm I never actually felt that it was unstable or “too” long.

So how does this all work.
Of course there is no AutoFocus on these lenses, of course there is no aperture setting on these lenses, it’s ALL manual.
But this is where the EVF comes in.
You can set the EVF of the Sony cameras in 2 different modes which Sony calls “setting effect”, on the “ON” setting you will actually see a “What You See Is What You Get” effect, in other words if you overexpose a scene you will see an overexposed scene in the viewfinder, same for underexposure. If you put the effect on “OFF” you will always see a “certain” brightness in the viewfinder and it mimics (sort off) and OVF (Optical Viewfinder).

Now at first a lot of people don’t “get” this.
Why would one go for an EVF over the well know OVF, and yeah guys I was one of those people. About a year ago however I sold all my Canon gear and switched to the A99 from Sony, some people told me I was going crazy and I understand, the reason I switched was double, first of course the dynamic range of the images (which is awesome) but also the EVF, and although you have to get used to it it’s something that REALLY grows on you. I sometimes call it the “Wacom effect” everyone I speak to hated their Wacom tablet the first 1-2 days and now can’t life without it. I won’t go as far as to say that I can’t life without an EVF but man does it make life easier.

Ok so why the long introduction about the EVF, well…. this is where the fun comes in boys and girls.
With the EVF you can put your lens on F16 and still have a very bright viewfinder, it’s the same brightness as if you were shooting wide open, this is a HUGE advantage when you want to use manual lenses. On a Canon/Nikon camera the viewfinder will be so dark on F16 that focussing and even in some darker scenes composition gets very very difficult. With the EVF there is no such problem. But that’s not where the fun stops….. how about focussing ?

With an OVF and if you really are into manual focus lenses (which I love) you can get a different glass in the viewfinder that makes manual focussing a bit easier, but as always these “helper areas” are all centered, so if you shoot wide open with a longer lens it’s always a matter of hoping, in most cases it works but in some cases it can be tricky. Also here the EVF makes it almost “child play”, with the Peaking option engaged and the color RED on HIGH it’s easy to get your focus perfectly. In the viewfinder you see your model and all the areas that are bright red are in focus…. yep it’s that easy. In some cases (with extreme backlighting) this works very well and even wins it from some autofocus lenses, it’s actually an option I have engaged all the time so when I switch to manual it’s always on.

So how does the lenses perform, well see for yourself. 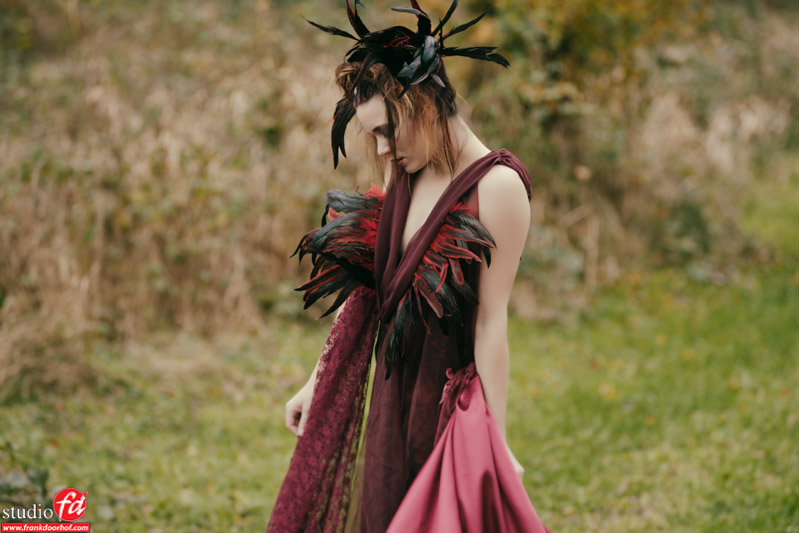 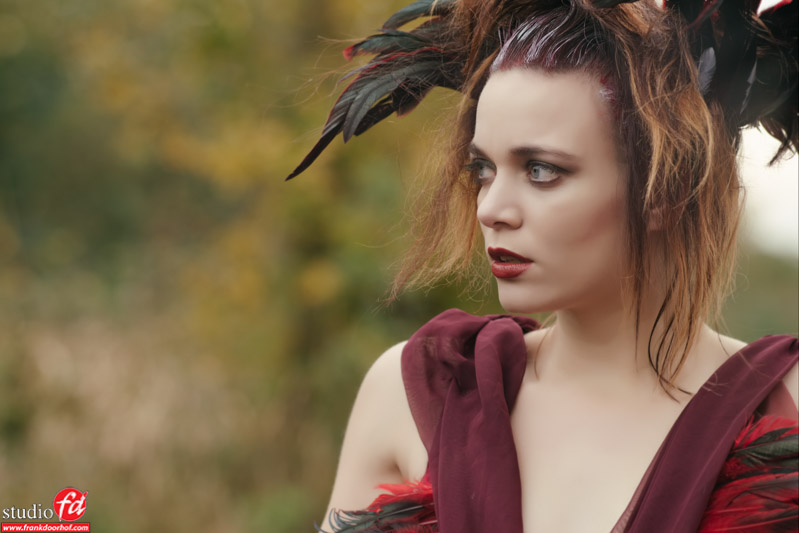 These are some natural light shots with the 135mm lens.
Now according to “most” it’s not the best lens in the Leica range, and I agree I would label the lens as just good/nice/great (closed down) but even then on the 36MP sensor I think it does pretty well.
See a 100% crop, and I have to add that I have the feeling I’m a bit off with the focus, but for wide open 135mm from a lens that is labeled as soft wide open on a film camera I have to be honest that I was more than surprised how it worked out on a 36mp sensor. 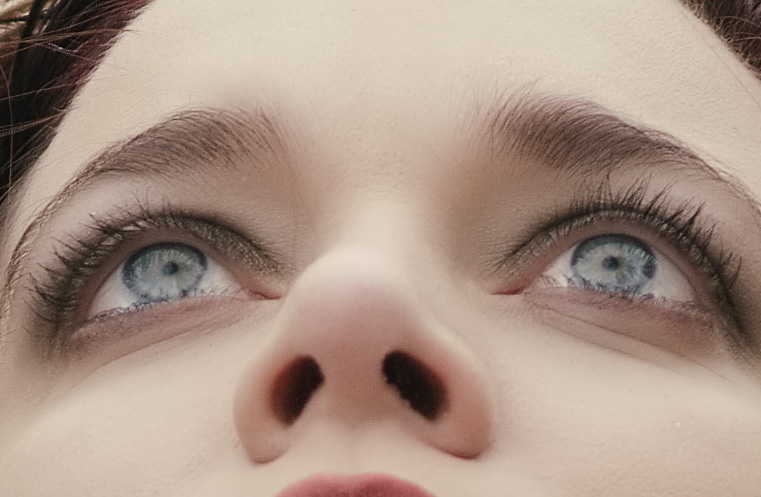 Because these were shot during a workshop I can’t take as much time as I want to get everything exactly the way I want it but it was also nice to see how the rendering of the lenses was.
Now this is always a bit of a strange thing and something that is often not understood.
When I talked to my parents and grandparents when I was young they always talked about the “Minolta look” at that time I did not really understand what they meant, but when I grew up and started to really delve into lenses it was very quickly clear that every lens had it’s own look. When I switched to Sony I decided to build up my lens collection with Minolta glass, at first because it was just a lot cheaper than the newer Zeiss/sony versions but very soon simply because I just loved the look. It’s hard to explain but it’s a certain color and rendering of materials that I really like. Now don’t get me wrong some of these lenses are far from perfect, there can be some chromatic aberration, some distortion but somehow… well they just look awesome.

Now as soon as I started using the Leica R lenses on the FujiFilm X-E1 I was very impressed by the 3D pop the lenses showed, and also on the A7r that 3D look is there, of course a lot of the 3D look has to do with lighting, but it’s also something where the lens can be very important. Both the 135mm and 50mm have a nice pop to them. But for the next shots it’s still the 135mm. 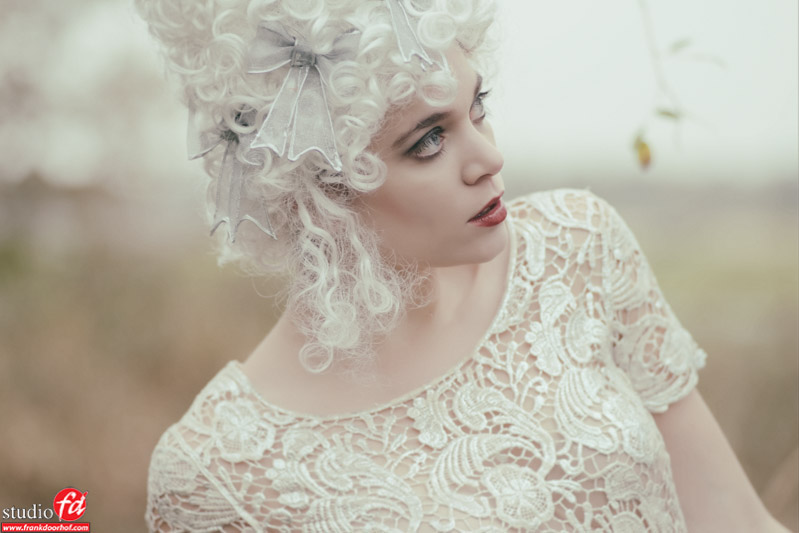 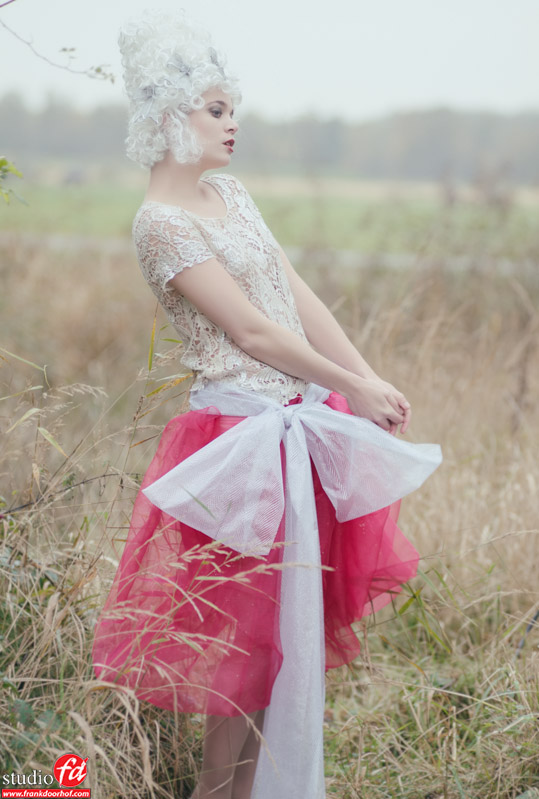 As you can see these were shot with natural light, in this case a very overcast sky (the big soft box in the sky).
The following shot was in the same location but now with one strobe hitting Nadine from the side. 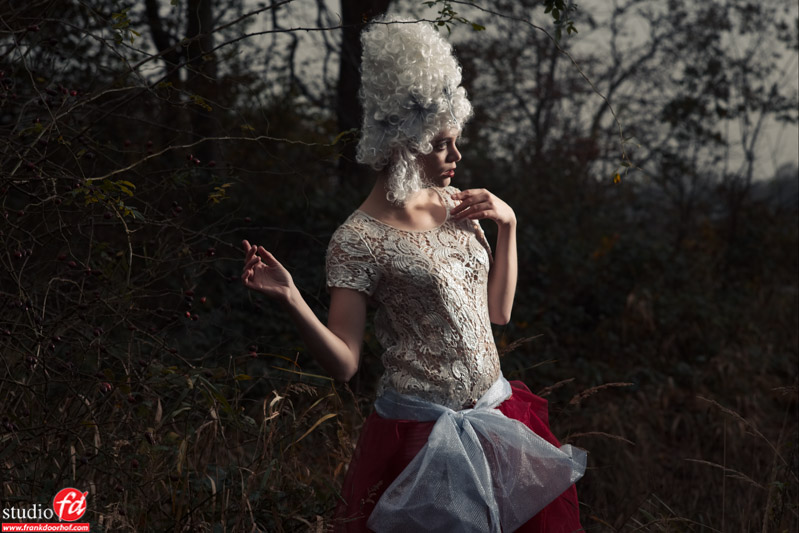 And I hope you see the same thing as me, it looks like Nadine really pops out of the background, again a lot of this has to do with the lighting, but on a lot of systems this image will still look “flat” in the way that the model doesn’t really move in a sort of 3D “world” (told you it was hard to explain) with the 135mm on the A7r however I really like the sense of “realness” in the image, this is something that really get’s me enthusiastic about a system. (and the reason I love Medium Format so much).

On the way back from the location we decided to stop along the road to do one more set, in this case with the 50mm lens.
The first image looks a bit weird because Nadine is still wearing her bathrobe, normally I would never use this shot, but somehow I loved it. 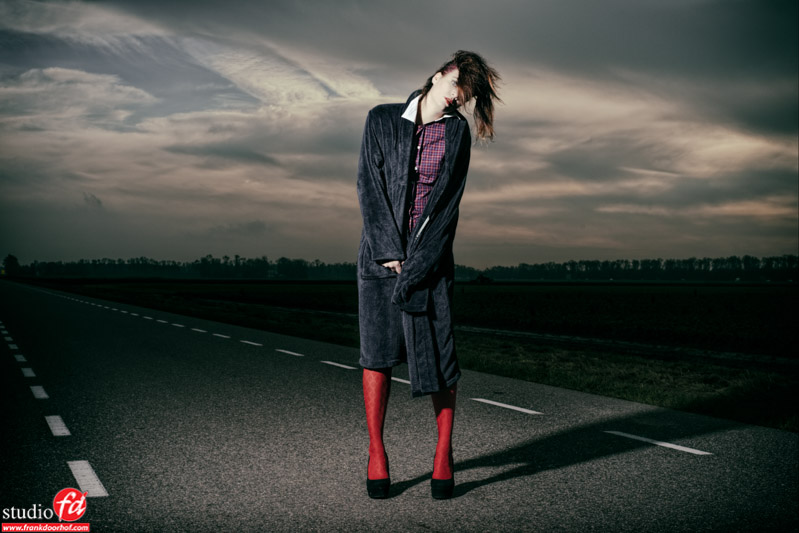 After this of course she took of the bathrobe and did the setup the way intended.
For the lighting here we used the Elinchrom Ranger with a Maxilight and grid set approximatily 3 stops above the ambient light. 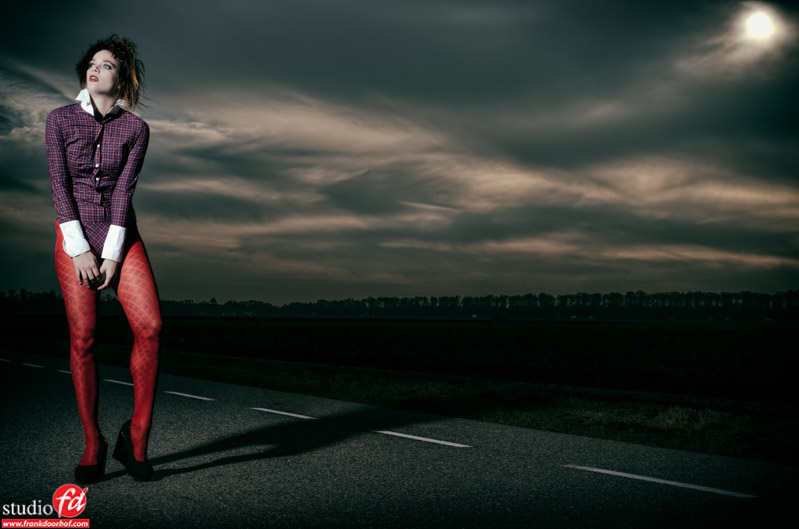 For the next set I used a green gel in front of the strobe and balanced on this to get a nice colored background. 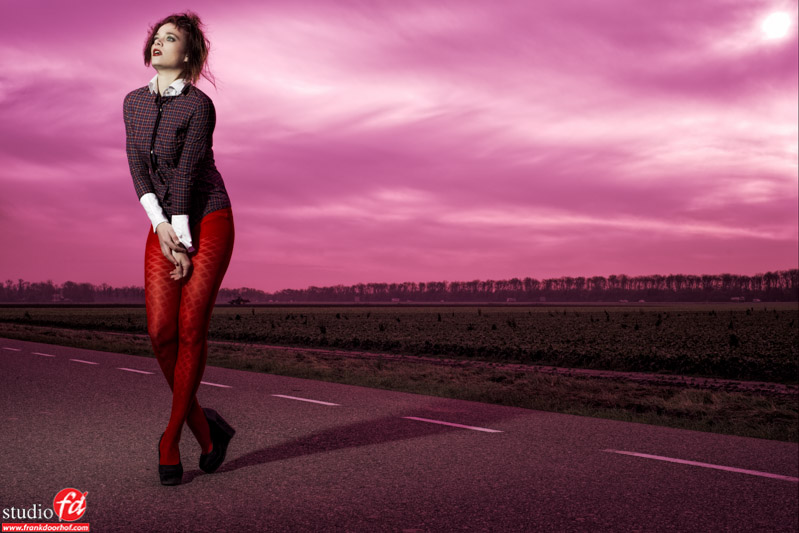 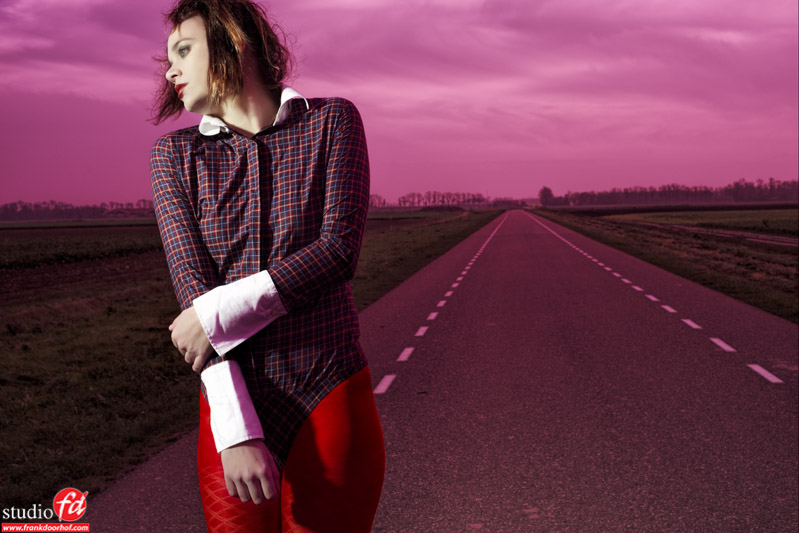 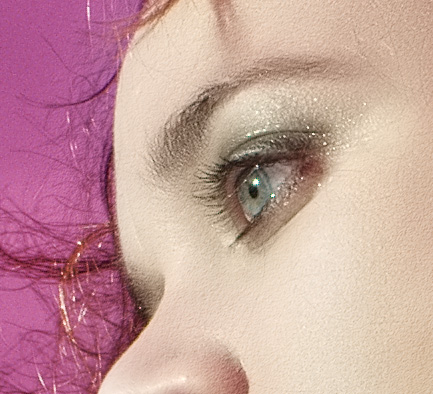 Work with different lights in the same location Sony A7r with some M42 glass
Scroll to top
Loading Comments...