Today some more images from New York and some questions answered people asked me about the Sony A99 and Fuji X-E1. 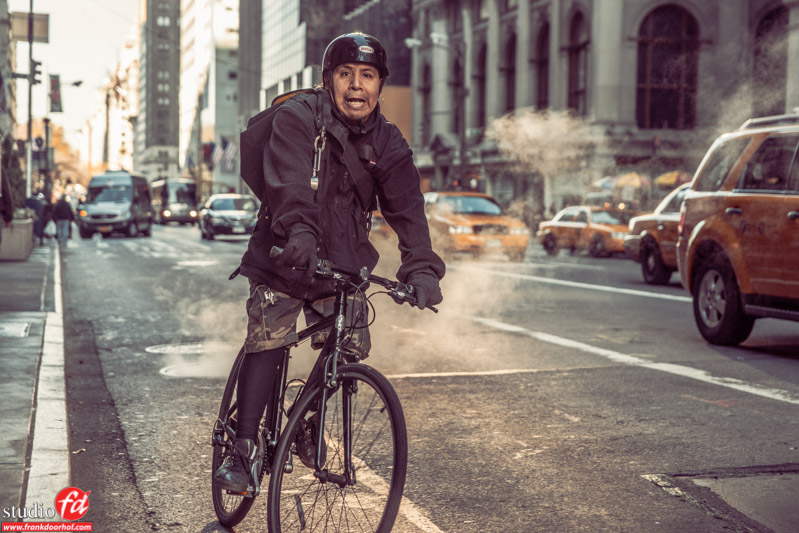 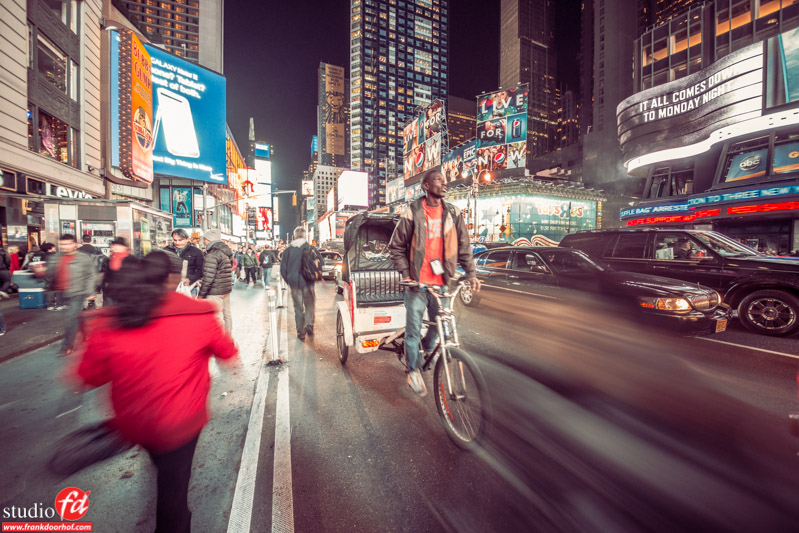 Ok let’s start with some of the questions.
Let me start off by saying that the answers will not be a real review, it’s my personal opinion.

How is video on the A99
Well today I shot a few video clips and the results are really nice. I shot on 1080P50 and the movement in the video is very smooth and detail is great. As soon as we’re back home I will try to make a more ellaborate video compilation and upload that, but what I see now is very good, especially on the higher ISO’s. 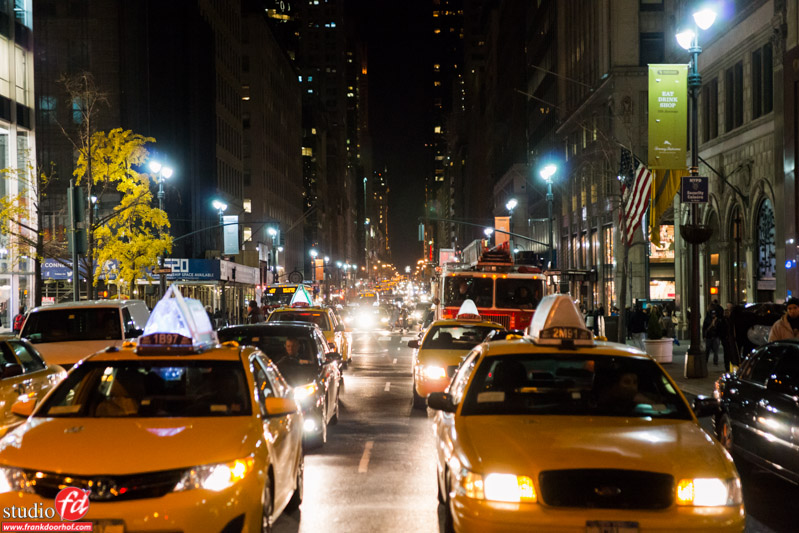 How is the noise performance on the A99
Great, I can’t say that I compared the 5DMKIII straight head to head to the A99 but today I shot several images on ISO5000 and ISO6400 and both look more than fine, they are without any doubt publishable, however do remember that noise can change per light source, and in this case we shot some subway shots and some outside areas on higher ISO, but honestly the high-iso files on the A99 are really good. 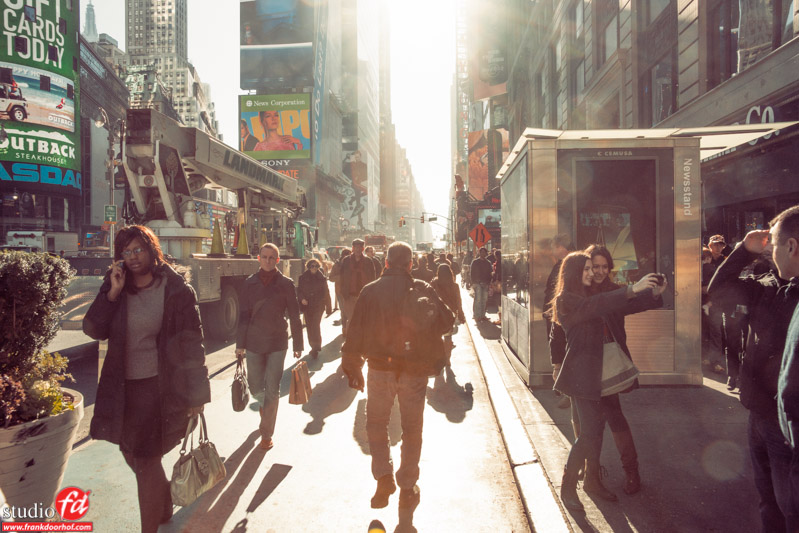 Is that dynamic range really that good
Yes, this was for my one of the main reasons to start shooting the A99, the dynamic range of this sensor is very good, the image above for example was shot straight into the sun and the detail I pulled back from the shadows is pretty impressive, the next image was shot at night and the problem with Times Square is the enormous amount of billboards. The last time we visited Times Square (a few years ago) I could do a great recovery of files, and the 5DMKIII is also really good in this, however when you see the next image you will hopefully agree with me that this is very impressive what the camera does, the dynamic range in this scene is really high. 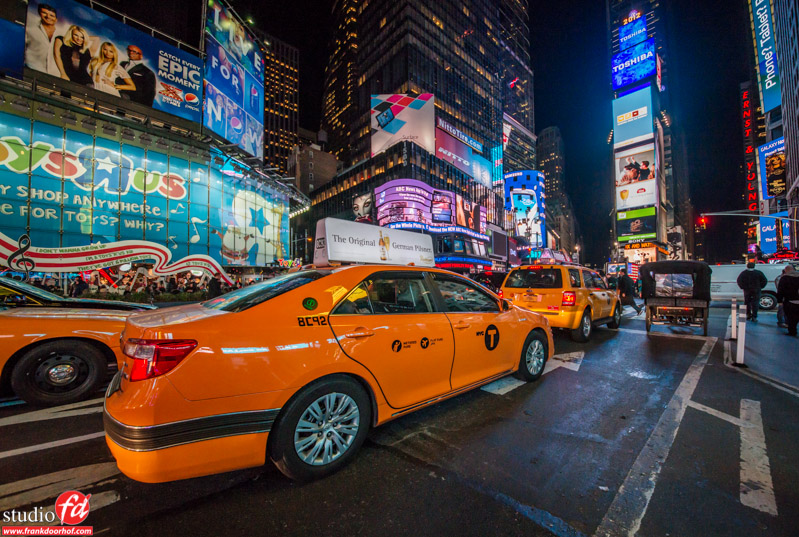 Now I hear you thinking “This is an HDR” and sorry to burst your bubble but I did not even use HDR software to do this, it’s all from one RAW file, in Photoshop I lowered the highlights and raised the shadows and that’s about it, the dynamic range that you can keep is incredible. 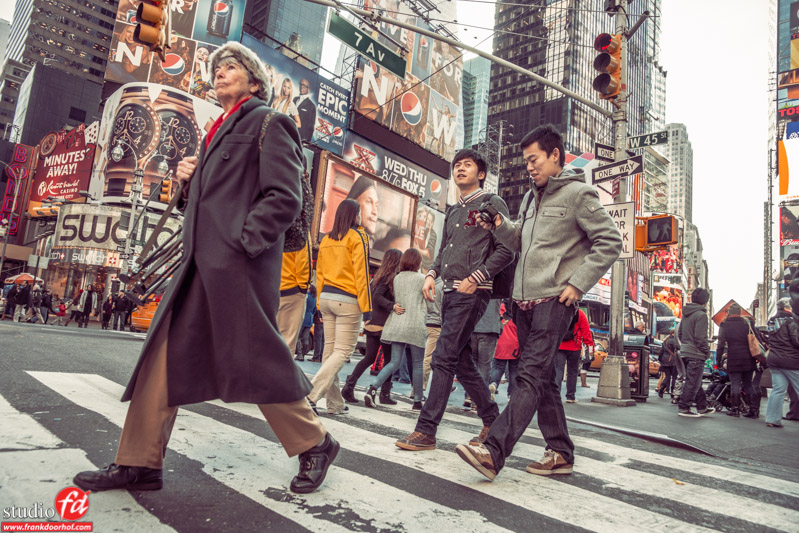 How is the Sigma 12-24 lens
I got the Sigma 12-24 just a few days before we left for New York so the first shots I took with it where literally the shots I took in New York. The lens itself is one I really like and I think I will add it to my selection of lenses, it’s very sharp (even wide open) and the range 12-24 is very interesting. I love to shoot from a lower angle because it gives the “world” a totally different feel and look and with a 12mm that is just a great option to have. It’s a lens I would without any doubt advise. 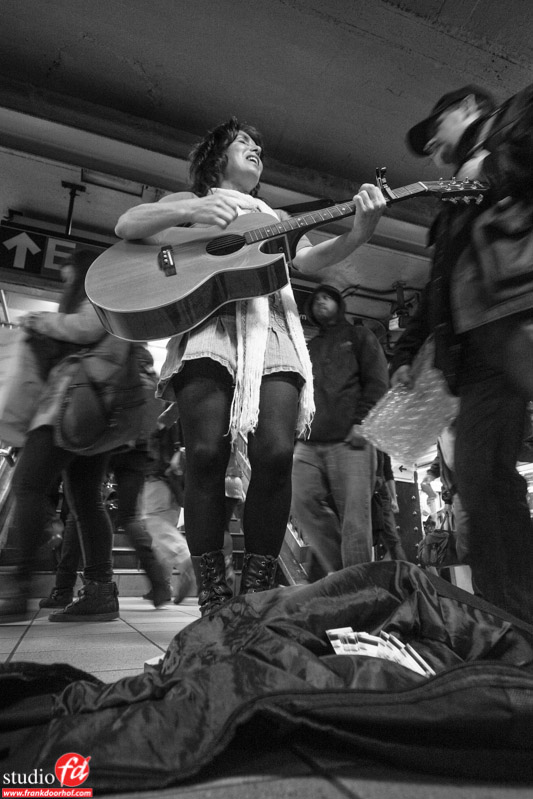 How is the sharpness of the Fuji 18-55 lens
Well according to some people all zooms are “evil” and only primes are great, well I don’t agree…. I do find that GOOD primes are sharper than most zooms, however I find primes for street style photography rather limited and in the end it’s all about getting the shot. And let’s be honest in the studio primes are great but on the street I think they aren’t, and let’s look at the focus point of the Fuji series……yep it’s the perfect travel/street syle camera. Now some people will not agree about this prime story from me, but imagine it like this “Sometimes you want to show a whole person, sometimes just a face, with a prime you can’t switch that fast (change lenses), with a very good zoom this problem is solved 😀 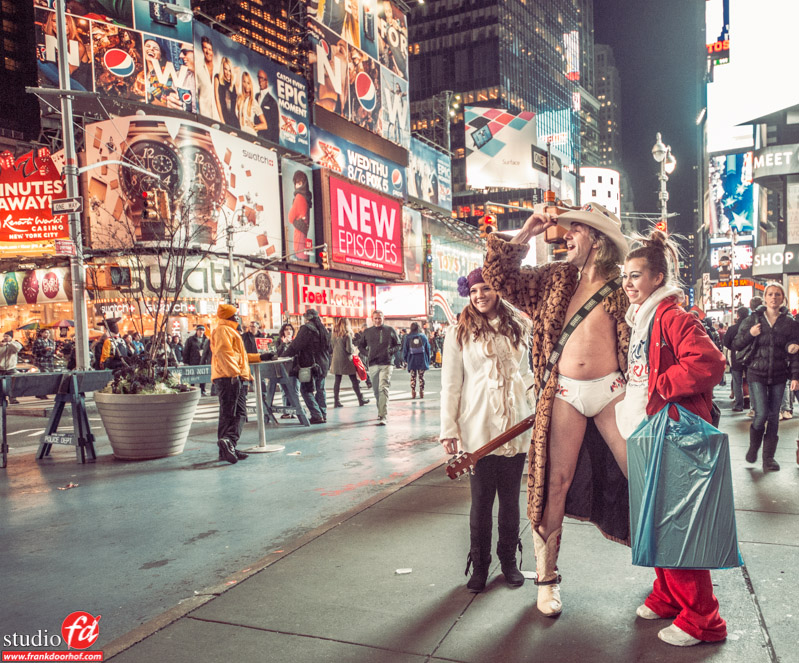 How is the focus in the X-E1
VERY VERY good, since the 2.0 upgrade the X-pro1 was already a huge improvement, and for my “Feeling” the X-E1 seems a bit faster and more accurate, but I would have to have them next to each other, this however…. proves that Fuji is making a very fine camera with the E-1M. It’s a street photographers dream camera. 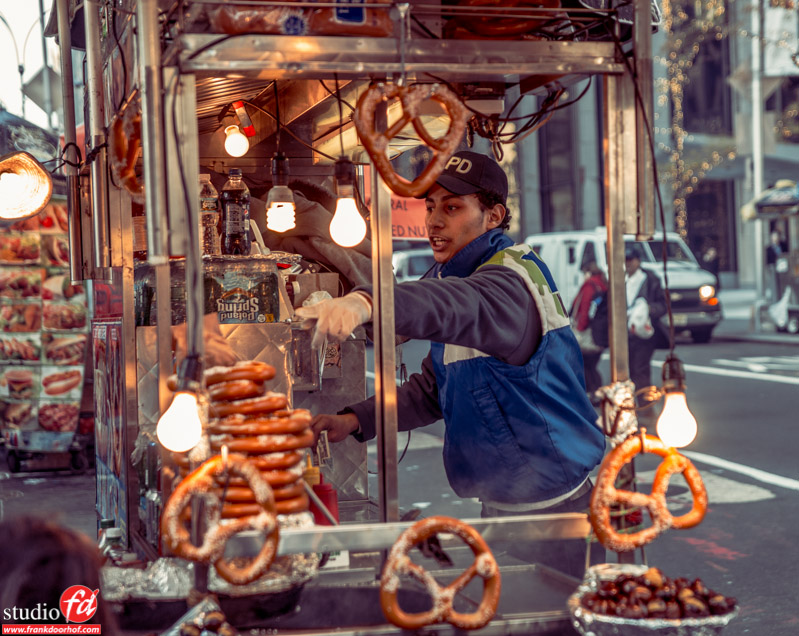 How is the AF of the Sony A99, there are so many options
Yeah I agree, but that’s a good thing.
For today I’m playing with the following settings.
First of all ISO, I’m now using my own setup without the AutoISO, which in fact will only do a calculation to the length of the lens to make sure you won’t get movement, but for me that’s not a good option, I want shutterspeeds in the 1/250 range that will work for me when there is a lot of motion and seeing that the Sony standard will be too low for me, I will just set the ISO myself (like I did before AutoISO). I do really hope Sony will add this in a firmware somewhere soon.

Focus points I use on Spot.
Object tracking is on with shutter half pressed and focus mode I’m still experimenting.
The face detection I sometimes use and sometimes not, overall I think the object tracking alone is good enough. 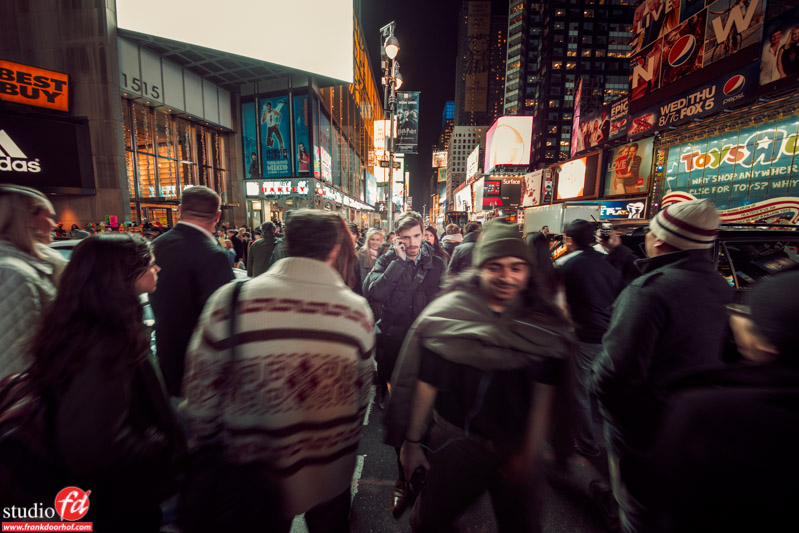 Battery life….
Today I ended up using 2.5 batteries in the Sony and the Fuji still has some juice left, but in all honestly the Sony was used a lot more and also for filming. I try to switch both cameras in interesting locations and everything in between while walking we will keep the Fuji save. So for me it’s no choice…. there has to be a grip 😀 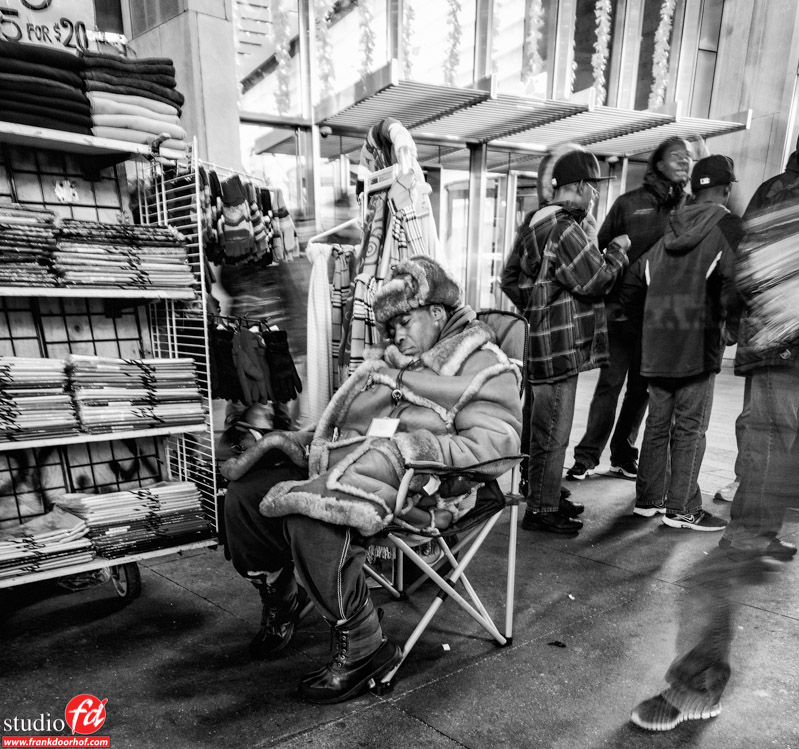 Do you use JPG on the Fuji
No sorry.
I know Fuji has some amazing JPG options and quality but I will keep using RAW and do the postprocessing in Lr. 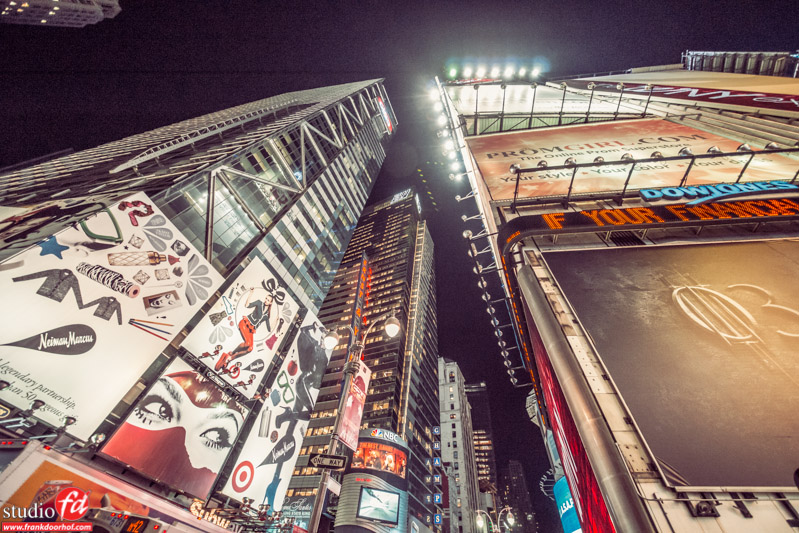 How fast does the focus lock on, with both cameras
Well very very quickly, the Sony A99 is incredibly fast and the X-E1 makes you wonder “what just happened” but as with all “good” things you get used to it very quickly, I found myself for example a bit disappointed when my A99 hunted in two shots with VERY heavy backlight, however a second try and it locked immediately. Later I realized that this was actually the first time ever I saw the A99 hunt…. and trust me my 5DMKIII would have hunted in that scene also (probably worse).

The X-E1 is also incredibly quick, just aim and press the shutter and it’s in focus (depending on the scene of course).

Of course is AF performance VERY depend on the situation/contrast, the lens and the light setup, but I think (considering the experience I have with other systems) I can really say that both cameras have GREAT AF performance, the Sony is great for tracking and really accurate and quick face following etc. The Fuji is incredible fast and also can do automatically  readjustment of focus, but…. it’s different from the Sony. 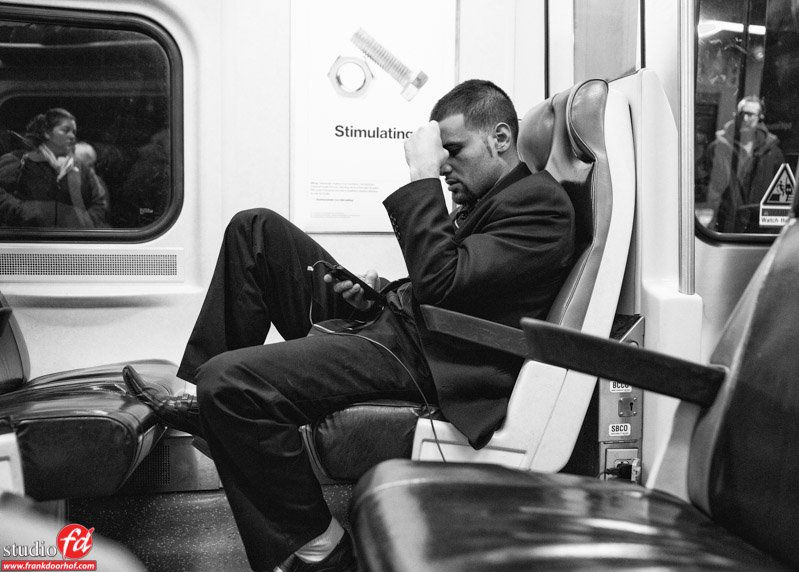 How is the EVF
Well this was something I was very afraid off in the start but seeing the fact I was already used to the Fuji cameras my “switch” to an EVF was much less problematic than I thought. For the Sony I can say that the EVF is VERY fast, it’s a very accurate tool for seeing what you’re doing, and then you press the shutter button and you have what you see, I call it WYGISWYS (What You Get Is What You See).

For the X-E1 the story is about the same, the EVF looks really good and is very fast, I would have to do a test side to side to make a real decision but how the EVF performances now….. I think both do MORE than fine with an EFV. Do remember you will have to get used to the EVF, but if you do, there probably is no turning back. 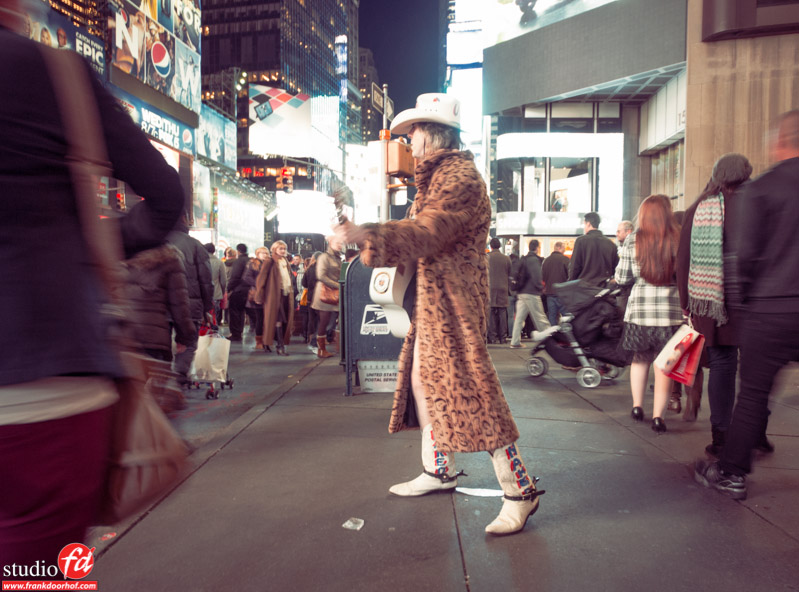 Ok which camera do I buy
Whoa, wait a minute….. you can’t really compare the two like that (but a lot of people do).
The Fuji is for me the ultimate travel and street photography camera, the price is right, the lenses are not expensive, you can even buy strobes and best of all (for a street camera) the high ISO performance is great. So if you travel a lot and you don’t want to bring a DSLR, get the Fuji X-E1, you will love it.

Now the Sony is a different camera.
Let’s for “easy” now call it a DLSR (which it is not because there is no “real” mirror like in the other cameras that moves). A DSLR system is more expensive but can be used in almost every situation, and I agree you could do a fashion in the desert with a Fuji but it’s not where the camera will shine, this is the job for MF cameras and normal DSLRs.

For me they go hand in hand but in different applications.
In the P&S area I own the X10 for these moments where I really want to cary something light.
In the street/travel photography situations I will bring the Fuji X-E1/X-Pro1, when I want to do everything on a trip….indeed, still the Fuji because as mentioned before it does do everything.
For studio work it’s the Medium Format for me (also for controlled lighting on location).

The DSRL (Canon/Sony) is used when I teach workshops, when I walk around (and I can/want to carry more than the Fuji with me) In my opinion the A99 is a great cameras and others might not believe me, but I think the market really is going to be changed very soon and Sony will be a serious player in this market, of course I cannot predict the future but when you listen to what’s gonna happen with the alpha series and when you see the quality of the A99 I think Sony is very serious about becoming number 1… now that will probably not happen over night for the simple reason that Canon and Nikon are so well known, but….. I think over time things will chance, unless of course both Canon and Nikon start doing the same kind of setups in their cameras. But I don’t think they will put an EVF in their cameras quick.

For me the choice of camera is horses for courses and I think it’s important to understand this.
Now when you are shooting as a hobby and you really only want one camera….. get the Fuji…… without any doubt, it’s a camera that is about everything you will get from a DSLR but it’s smaller, the lenses are smaller/lighter AND…. the image quality rivels many DSLRs.

When you want to work in the studio, do model photography, maybe sometimes a wedding or a paid shoot….. now get the Sony/DSLR. It’s a real all rounder and it looks much better in the studio for a client than the Fuji. The major point for me with the Fuji is it’s size and the way it looks, it doesn’t draw attention to itself and gives you that way more options to make images on the street that with a DSLR are more difficult, however in a studio setup (especially paid jobs) I think the Fuji will not set yourself as a pro towards the client.

One of my fav NY shots