Oempf this weekend it was time again for the Scott Kelby WorldWidePhotoWalk.
Now for people not knowing about this “mega-event” see www.worldwidephotowalk.com
But in short, it’s a worldwide day where photographers create groups of 50 people max and do a 1-2 hour photo walk in their city (or another cool location).

Last year I hosted a two day photowalk in Kampen and that was a lot of fun, for this year however I decided to do one in Amsterdam. Somehow the first one was full in the time period of 1-2 days (wow) so after a few days we decided we would do another one at night/evening, plus I added a small model option after the morning photo walk…. well I did not know what would happen during the day.

Above you see the two groups we walked with, or as I called them “the walkers” with of course a big hint to the great series “the Walking dead”.
Normally photowalks are always cool, fun, great and all the other things that are great, especially with a nice location.
Well, that being said…..
What we did not expect was pooring rain, and I really mean A LOT OF RAIN.
Well I have to be honest, during the morning walk we did have about 1 hour of relatively dry weather, but of course when you are at the furthest point it starts to rain, so before we arrived at the restaurant where we finished the walk with a great lunch we all looked like we just crawled out of the canals of Amsterdam (but without the smell). 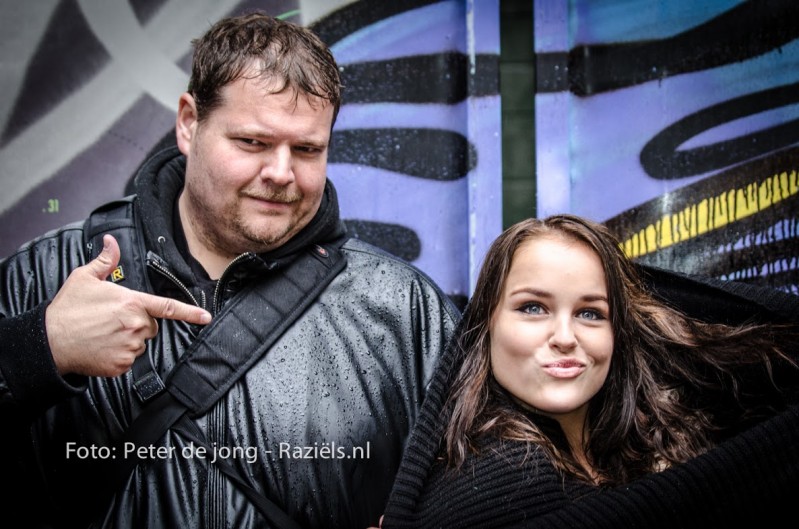 Because I promised my models (Esther and Manon) a photoshoot and they were such troopers that they followed us around for the official walk I could not back down of course, so we continued the photowalk with a small group of people that were interested in model photography for a city photo shoot, and yes…. in the rain. Eventually we  ended up at the central station where, much to my surprise, we were not send away while carrying around small strobes and still being in a group of at least 20 people. I think they thought that we looked wet enough and just let us go in peace (thanks guys). 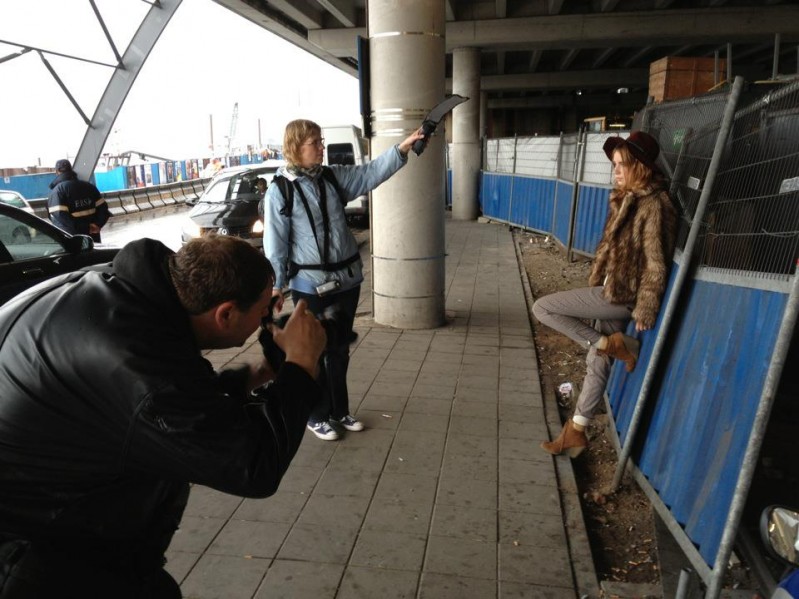 After the Photoshoot part Annewiek and I went back to the hotel to freshen up and get dry and of course grab some diner with our friends from Fotoflits (the Dutch Elinchrom agent), to arrive back the central station at 7:00PM for the evening part, and men did it become cold in that few hours, but it was dry…. YEAH…. well…. for 10 minutes 🙁
Yep as soon as we were walking for 10 minutes it started to drizzle and about 30 minutes later we lost I think 5-6 people who loved to walk but were so wet (not the correct clothing I guess) that they had to quit (sorry guys), but we continued…. when I promise a 2 hour photo walk I WILL DO 2 HOURS 😀
I think we ended up with 10 people at a local Burger King to get warm again and get something to eat, the rest of the group we lost along the way, the weather was really not helping. 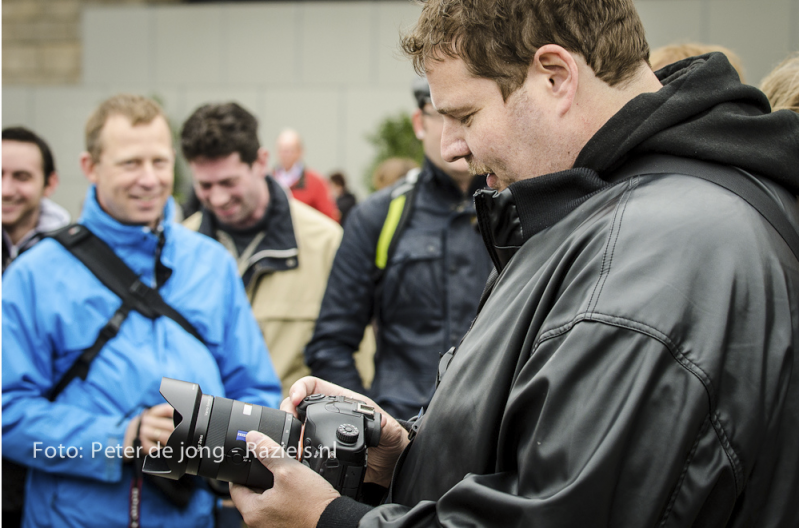 All said and done, one would think that we did not get any cool shots…. well that’s the kicker.
Shooting during a sunny photowalk in Tampa…. pfff that’s something that everyone can do 😀 (sorry guys)
But shooting in the pooring rain in Amsterdam is not only a challenge for the gear (I can now officially confirm that the Sony A99 is weatherproof, there was no water coming out of the memoryslots. I’m testing the A99 for Sony at the moment, more to come) but also gives you some unique photo opportunities and some stunning lighting effects at night, this is one of the reasons why I choose to walk through the red light district of Amsterdam and to be honest it was awesome. I once visited this area a few years ago during a nice summer night to photograph but to be honest I was incredibly disappointed, but not tonight, the combination of rain, the lights and the people walking by with umbrellas made the scene very surreal and cool to shoot. Yeah I was cold to the bone, even my underwear was wet but the images were worth it I think, and I hope to share some with you in tomorrows blog post. 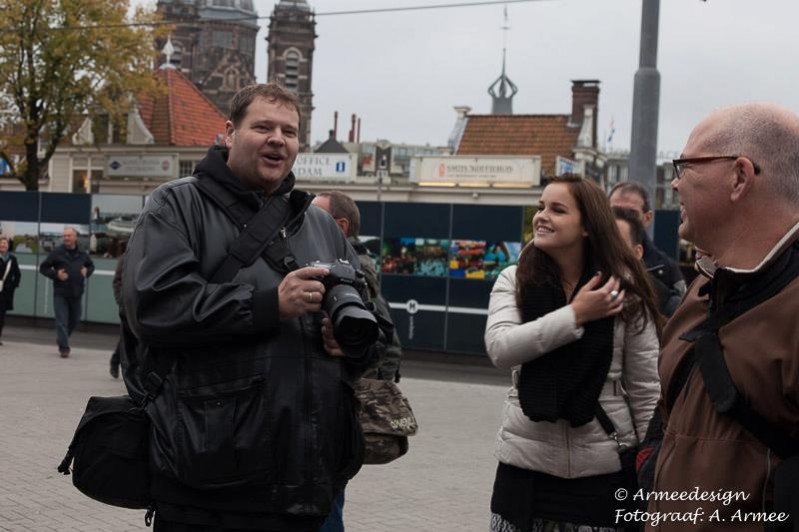 In closing some stats
Our morning group was app 35-40 people (not all people joined at the moment of the group shot), the modelgroup was app 20-25 people and our evening group was app 20-25 people (a lot less at the end), our tracker shows Annewiek and I walked app 32km that day, the morning group walked slightly below 10km and the evening group 9km (if you stayed till the end) during the 2 hours. Annewiek and I started the walk actually at 7:30 to scout some locations and of course get a feel for the route and we ended the day at 11:00PM in our hotel. And…. we had people from Poland, the UK, Belgium and Australia joining us (according to them only for the walk…. but somehow I doubt that :D) 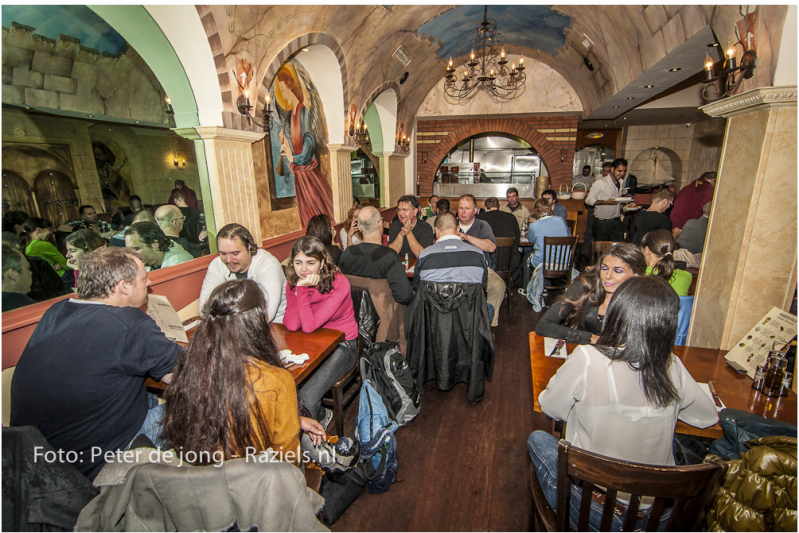 Some thank you’s
First of all I would love to thank all the “walkers” you guys were AWESOME!!!!
I would like to thank our wonderful models Esther and Manon who did not back down for a little rain.
Fuji for lending us some X10’s, a X-pro1 and a super zoom for use during the walk.
Transcontinenta for lending us some Tamron super zoom lenses that in my opinion are great for street photography, they lend us both the Crop and FF versions in both Canon and Nikon fitting so everyone who was interested could use one.
And of course Scott Kelby for organizing this event. 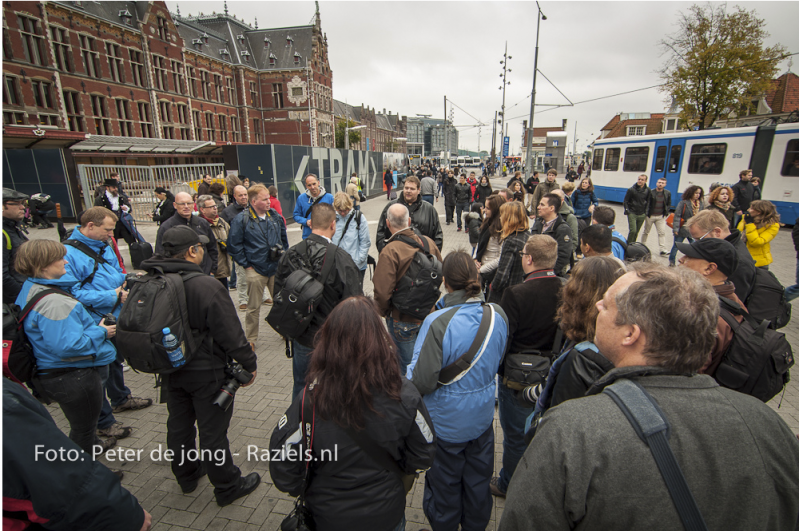 And last but not least….. my wife Annewiek.
She was carrying most of the gear, being my VAL (Voice Activated Lightstand) during the modelshoot, my trusty companion, filmer for the BTS video, helping out people that were lost and so much more (it could be whole blogpost 😀

It was an awesome day, and I’ll be doing one again next year (maybe in a nature park or Zoo, or just a city again we will see).
But I hope Scott will plan the date during a day that’s dry 😀