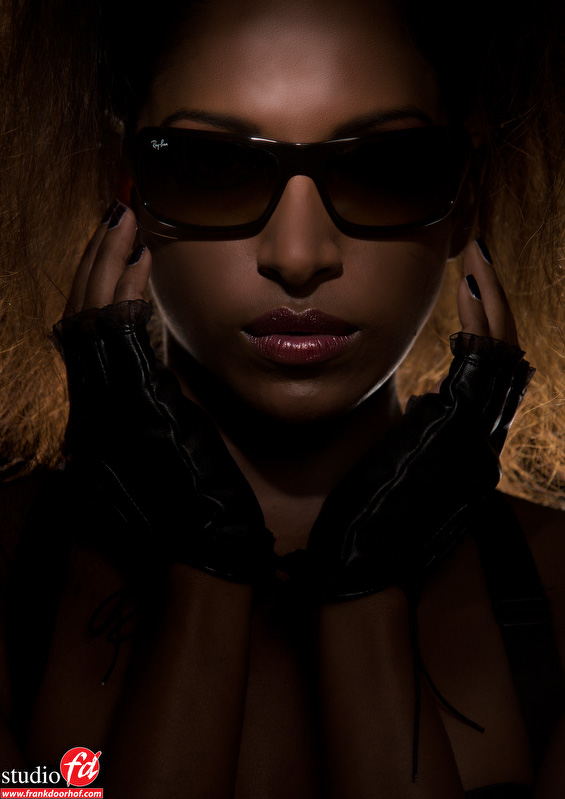 The advanced II workshop is always a special one.
In the other workshops there is a lot of attention for the theory and bringing this into practice in the second part of the workshop. With Advanced II we do it slightly different. There is of course a piece of theory before the shoot but this is because otherwise we would have to wait for the MUA which is always present with this workshop. In the Advanced II workshop there are no boundaries we have to stick to, everything goes and this is also often the workshop were I start to freak with light, or in other words try out new things……

During this workshop there is a lot of attention for posing and story telling.
This gives an extra boost for the portfolio from the students but it also sets the stakes high for the models we use for this workshop, and for this workshop it was time for Nirmala to do her first Advanced II. Nirmala normally is one of my glamour models but I know she can do so much more and is without a doubt one of the best posing models I know, she is very dynamic and can do things with her body that is just plain….. awesome.

Showing some reflections
One of the most used tricks to get shine on the skin is of course oil.
It’s always fun to see how such a simple trick can enhance the light on the body.
For this setup I used the Elinchrom 1.90 Octa and two striplights as accents.
The main idea behind this setup was showing how you can play with shadows and highlights to create depth and definition to a models body. 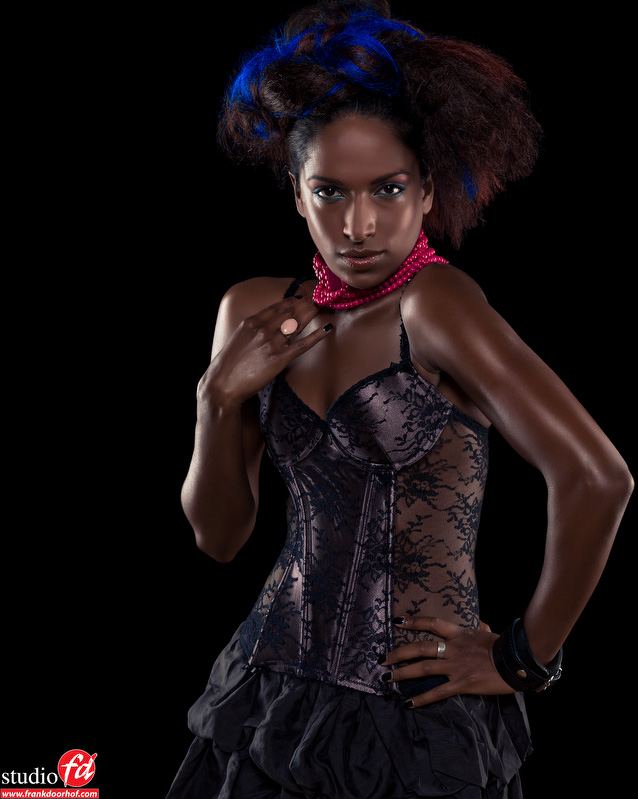 Posing with the fun factor
For the first setup I made a white background setup.
A lot of people are struggling with this but in fact it’s rather easy.
For the main light source I used the Elinchrom 1.90 Octa with the front diffuser removed.
For the background I use the Elinchrom wide reflectors, if you don’t own these yet, get them! they are great to light backgrounds and you can also use them on location to give a very nice even light quality without having to use larger modifiers, they are without a doubt in some occasions my “secret weapons”.
On the floor I used plexiglass to make sure the shot would be perfect out of the camera, so no Photoshop would be needed to make the background/floor whiter. So yes it is possible to shoot an image like this with just two strobes on the background. However that’s not all yet.
When you want to give depth to an image you normally use shadows, but because with this setup the light is rather flat you have to be creative. And the opposite to shadows are highlights, so with this kind of setups I use 2 extra strobes with open reflectors to give highlights to the model. The ratio between the main and highlights is something you can play with but I often end up with a 1:1 setting or a slightly lower ratio, but to be honest I only measure it to set it 1:1 and after that I will play with it, it really depends on the model what I will end up with.

As mentioned before with this setup it was all about posing, I decided to shoot mainly full bodies and gave Nirmala an old Clack camera to play with and just see what happens. 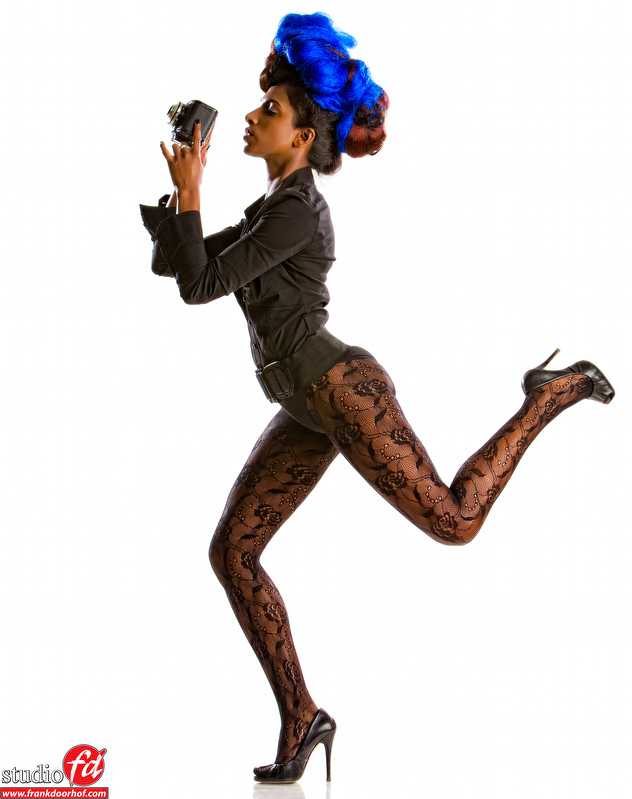 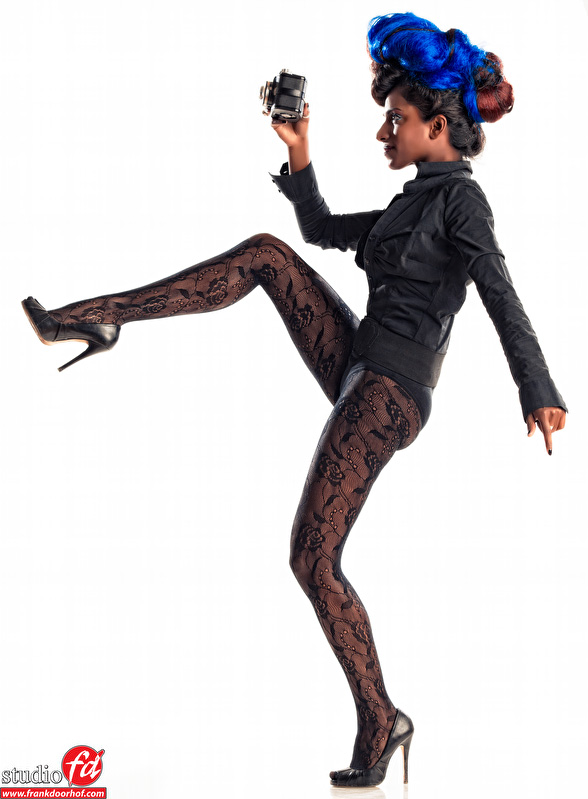 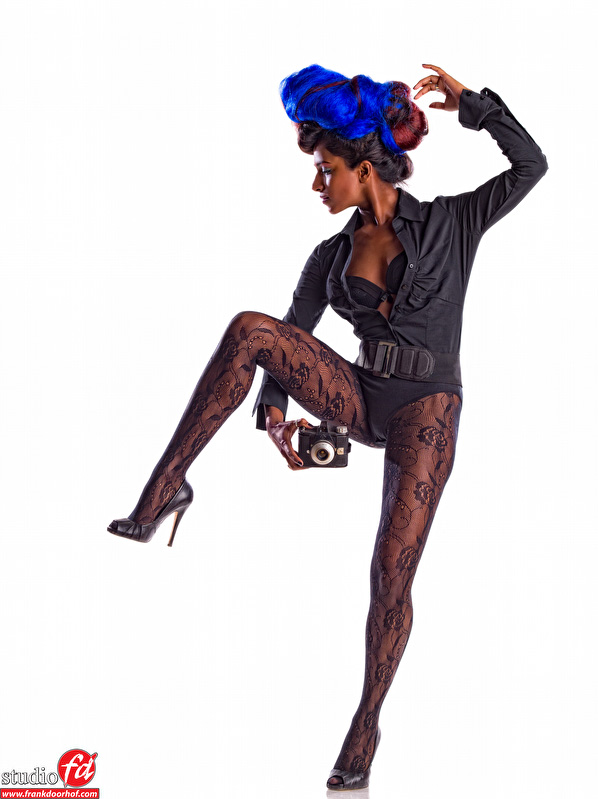 Third setup, playing with light
Sometimes I will try something during a workshop that I did not yet try before.
This time I decided to play with a very difficult light setup. I love playing with shadows but in this case I decided to work with even more, instead of letting the shadows create the mood I thought it would be cool to limit the lightspot so much that it would just enhance the portrait enough to show what I wanted it to show. I really have to give credits to Nirmala because for this setup she had to stay in an EXACT position for 10-15 minutes during the explanation of the setup but also during the part where I tried to show the problems and advantages of this setup.
For this setup I used a Chimera striplight as hairlight (I hate to use the harder light sources as hair lights because in my opinion they draw way too much attention to the hairs and making them look too harsch, the soft light quality as hair light works much better in my opinion). To light up the face I use an Elinchrom snoot with grid. Some fill in was used to open up the shadows just a little bit. 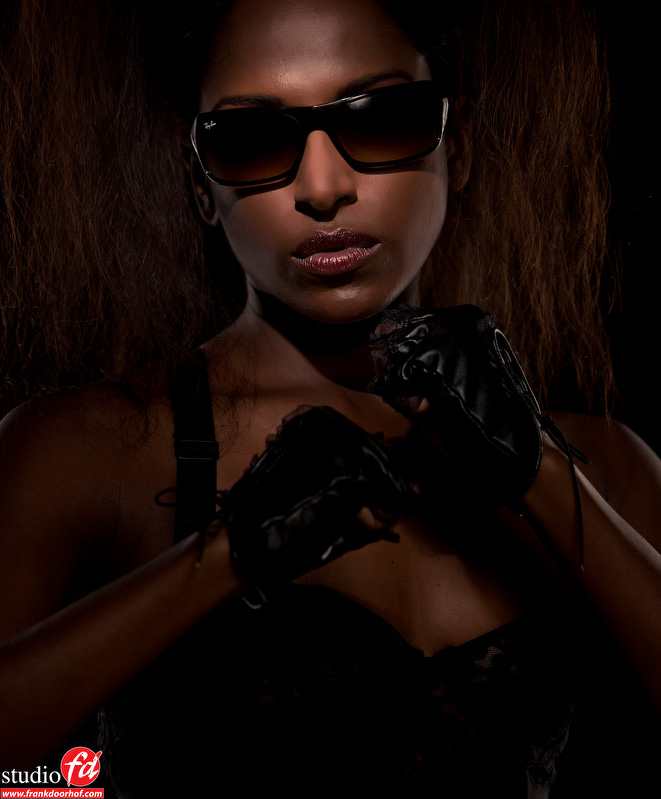 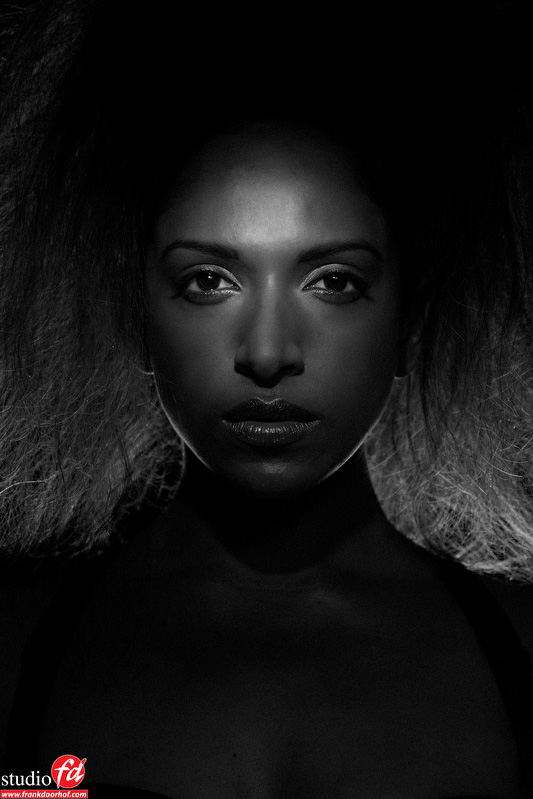 Conclusion
Shooting just an image with good light will often not give you the result you want.
Yes it will look good, and yes it’s technically perfect (or at least as far as we can shoot the perfect image, which in my personal opinion, never happens, there is always something I would like to be different), but often it will not engage the viewer into something that will keep them coming back to the image. I don’t say my images are just that but I do always try to get a little bit of movement, expression, story telling or something else that will set the images apart from the rest. Finding that “secret” ingredient will often be very difficult and sometimes it will just happen, but I strongly believe you should ALWAYS look for that “ingredient”, it can be as mentioned before just a little movement or maybe a small prop, maybe something that just doesn’t belong in the image but makes the image complete. A good example for this is a series the great Dutch photographer Erwin Olaf shot were he shot relative classic looking portraits but left in small details like apple earbuds, a cell phone etc. it gave the images something that really drew your attention and made them stick in your mind. If you as a photographer master this kind of “inside jokes”, “good use of props” or what ever you want to call it, you will again lift your photography up to the next level.

Feel free to leave comments on this blogpost and share it online.

Greetings,
Frank
If you like what we do here, and want to support the blog please buy from our affiliate companies by following the links or the links below.

Our forum revived…. The “soul” of a shot
Scroll to top
Loading Comments...