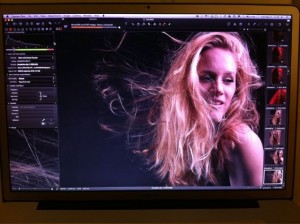 Today it was the time for the first day of Photokina. For me Photokina is something amazing, it’s huge, everyone is there and you get all the news and the new introductions in one place. It’s buzzing with activity, contacts, great photographers and lots and lots of toys….(that’s why I take my wife with me :D).

This Photokina we had Leaf with the 80MP AptusII-12 which I already mentioned, but also Elinchrom had some nice new additions. As you can see in the backstage video at the end of this post you can see the one that really got my attention, the focussing flash tube in the new Ranger heads. It’s gives you some nice new possibilities to really shape your light just that bit further. There will also be some new heads for the powerpacks by the way and some smaller things, the 1.50mtr indirect octa (high on my wish list) is also here and will probably be available in the coming months.

Today I also did some shots with the Phase one vertical grip with build in Profoto Air trigger, to be honest I will probably never use the trigger because I’m using the Elinchrom skyports, but the grip itself will be added to my camera very soon. It makes the camera a lot better ergonomically plus it balances more nicely, it runs on the Leaf accus AND normal batteries and you can switch so when your accupack dies you can switch to the AA batteries and keep on shooting, but maybe most importantly with the grip you can now do the firmware upgrades yourself.

For today my model was Laura and during the day we did several small workshop/demos explaining mostly control of contrast. Overal it was rather busy and the people did not leave before the end of the demo :D, but I have to admit I always try to keep it interesting of course. I hate to work on a schedule during these days so the schedule they made for me was broken from the first show I guess. I always start shooting when there are enough people on the booth, I think that works much better than keeping a tight schedule on a booth. But of course I did do the demos also on the times on the paper.

For tomorrow we will have another model so I’m anxious to see what that brings, I will also try to look around a bit more to also get an impression of the Photokina because today I did not make it further than 10 minutes of the Joe McNally presentation which I would have loved to see to the end, but duty called. 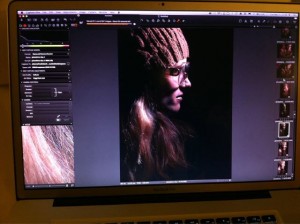 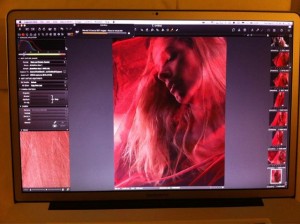 And the backstage video